'Grandson of a poor farmer in India': Vivek Murthy re-introduces himself to America 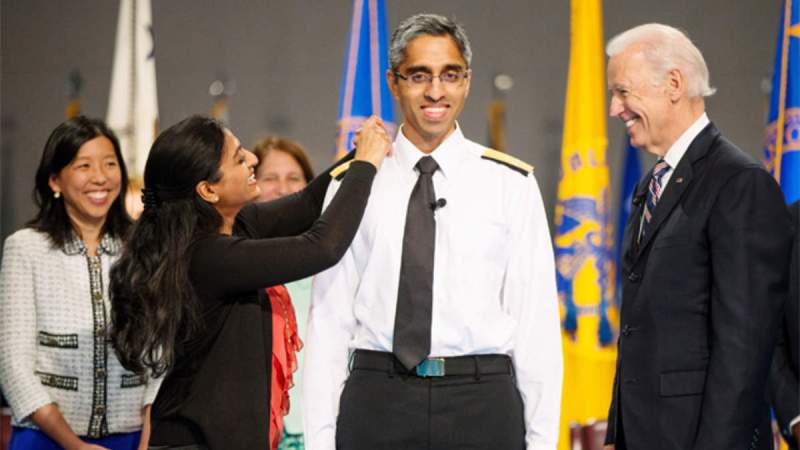 Vivek Murthy, Indian American nominee for US Surgeon General and "grandson of a poor farmer in India" struck notes of gratitude and an empathetic approach to his new role as he delivered his first public remarks from the Biden-Harris lectern after being picked to be America's Doctor.

Below is the full text of Murthy's speech, delivered at Wilmington, Delaware on Tuesday afternoon:

When I left my role as Surgeon General, I never dreamed I would have an opportunity to serve again.

And in this moment of crisis, when so many Americans have fallen sick and lost loved ones, when people are losing jobs and struggling with childcare, I feel grateful to be able to do everything I can to end this pandemic.

While this is a daunting task, we absolutely have what it takes to get the job done.

We have world class scientists.

We have courageous medical professionals who are risking their lives to care for the ill.

We have companies on the cusp of delivering vaccines, and we are blessed with generous, compassionate people all across America who are stepping up to help those who are struggling.

If we all work together, we will overcome this pandemic and return to our lives.

But COVID 19 is not the only health crisis we face - if anything, it has underscored a host of other epidemics that are devastating families and shortening lifespans: addiction, the opioid crisis, and spiraling mental health concerns; glaring racial disparities and high rates of diabetes and heart disease.

These challenges are both caused and exacerbated by broader societal issues - from the economic strains families face to the disconnection and loneliness many of us feel.

In my new, expanded role, I will work to bring a health perspective to our policies across government so thatA our schools, workplaces, and communities can be forces for strengthening our health and well being.

But the truth is that the best policies - and the best vaccines and treatments - will not heal our nation unless we overcome the fear, anxiety, anger, and distrust so many Americans are feeling right now.A

So more than anything, I will come to this role as a doctor - one who learned the most important lessons about medicine not in medical school, but in the clinic my parents opened when they first came to America as immigrants decades ago.A

As a child, I saw how they took the time not just to diagnose illnesses, but to ask about their patients' families and lives, happily poring over photos of children and grandchildren taken from wallets, listening deeply to people's stories and struggles, often running well over the appointment time.

They taught me that the best doctor is not an authority figure who writes prescriptions, but rather a partner in healing a" someone who sees patients in their fullest humanity and empowers them to take control of their health.

That is the kind of doctor I have always tried to be.

And if confirmed, that is the approach I will take as I serve as America's doctor.

I will dedicate myself to caring for every American, driven always by science and facts, by head and heart- and endlessly grateful to serve one of the few countries in the world where the grandson of a poor farmer in India can be asked by the president-elect to look out for the health of the entire nation.

That is a testament to the promise of America - one that I will work to fulfill every day as Surgeon General.