Grenade blast near Army's Triveni Gate in Pathankot, all police check-posts on alert

Pathankot SSP Surendra Lamba said that the police have been investigating the matter, CCTV footage has been scanned and an alert has been issued to all the check-posts of Pathankot. 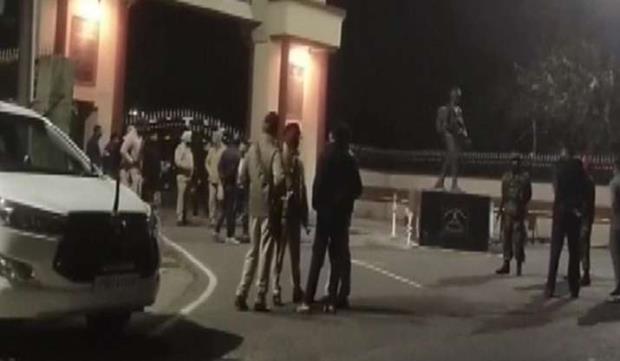 A grenade blast took place near the Army’s Triveni Gate in Pathankot on Monday morning. As per the latest information, the grenade was thrown by unidentified motorcycle-borne assailants at around 9 pm, when a marriage procession was passing by from the area.

The incident has triggered a district-wide alert and a search operation to apprehend the perpetrators.

"The hand grenade attack took place around 9 p.m. on Sunday near the Army's cantonment's Triveni gate. There has been no loss of life. The CCTV images are being viewed. No arrests have been made yet, and investigations are currently underway, said Sudrinder Lamba, Senior Superintendent of Police.

Mr Lamba said that the police force has been rushed to the spot. “Some parts of the granite has been recovered after the blast from the spot.”

Police are using drones to conduct a search operation in the area with the help of the BSF.

The senior police officer claims that they were leaving nothing to chance and that security in Pathankot and the surrounding areas had been beefed up in order to track down the suspects.

This is not the first time that terrorists have carried out attacks on security forces in Punjab, particularly Pathankot.

Five years ago, the Indian Air Force's Pathankot base was attacked by six heavily armed terrorists who entered India from Pakistan on the night of December 30-31, 2015, via the Kathua-Gurdaspur border crossing in Punjab. Terrorist carjacked Punjab top officer Salwinder Singh's SUV on January 1, 2016, to get close to the airbase. The attacks began on January 2, but the terrorists were identified by security personnel using thermal vision while attack helicopters pinned them down with rockets.

Terrorists also targeted a police station in Dinanagar in 2015.