Gujarat: Indian Army miraculously rescuing 18-month-old from borewell video is a must watch

Indian Army on Wednesday safely rescused 18-month-old Shivam who had accidentally fallen into a 300-ft borewell in Dudhapur village, Gujarat. 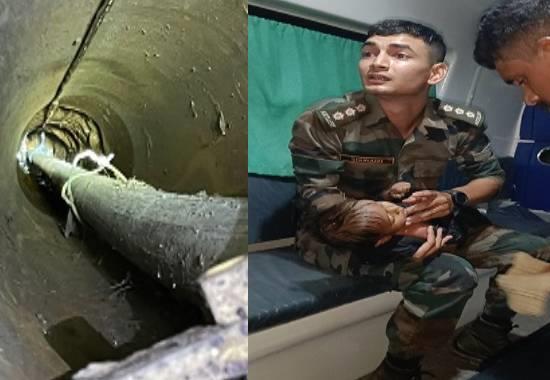 Whatever the situation is, the Indian Army is always ready to deliver. The following statement on the Indian Army turned into reality after its personnel miraculously saved an 18-year-old boy who had fallen into a 300-feet borewell. Indian Army on Wednesday safely rescued 18-month-old Shivam who had accidentally fallen into a 300-ft borewell in Dudhapur village located 20 km from Dhrangadhra Taluka of Surendranagar district, Gujarat.
The rescue video was shared by PRO Defense Gujarat on its Twitter handle and it went viral in no time. The Gujarat infant rescue viral video has been earning the Indian Army personnel a lot of praise on social media. In the Gujarat Indian Army borewell rescue viral video, you can see how the personnel rescuing an 18-month-old boy named Shivam from a 300-ft deep borewell with the help of a rope.
As per Gujarat Defense PRO, an Army team was requisitioned by ASP Dharangadhara to rescue 18-month old Shivam from a 300 ft deep borewell at late night. Golden Katar Gunners under Captain Saurav rushed to the spot, modified metallic hook, rescued, and took the child to the hospital. Following a medical checkup, the 18-month-old Shivam was declared out of danger.
Watch Gujarat Indian Army Shivam Borewell Rescue Video
Also Read: AAP dissolves Gujarat unit ahead of state elections