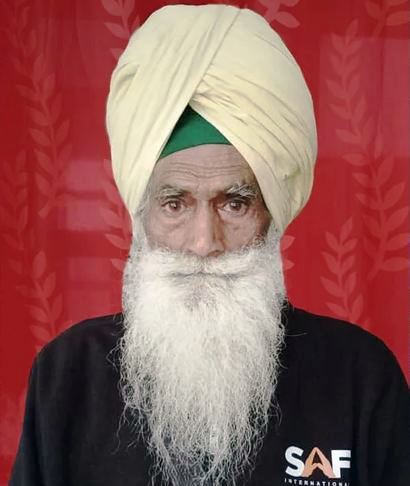 Gurmukh Singh is a resident of a village in Fatehgarh Sahib. According to a report published in News Laundry, Singh is 80 years old. As soon as the farmers protesting against the three contentious laws reached Delhi, the government led by BJP at the center had asked them to go to Nirankari Ground in Burari instead of protesting at the borders around Delhi.

However, few farmers had accepted this offer while majority of the others rejected it. It is at Burari that Gurmukh Singh was arrested on January 28 after the unrest of January 26.

Before starting his side of the story, Singh told News laundry "I will never forget the humiliation."

Singh, along with 25 other men from his village had been to Delhi to be a part of the January 26 tractor parade. Although, he didn't be the part of the parade because he said the journey tired him. Everything was going as per plan. The Delhi Police had given permission to the farmers for holding the tractor march until the incident where one section of the farmers unfurled 'Nishan Sahib' and  a Farmers' Union's flag at Red Fort. This was seen as an insult by larger section of people and their union leaders disowned those farmer.

The police arrested around 122 farmers by February 1. Gurmukh Singh says that after the incident, the police became stern. Many policemen directed them to wind-up their protest and go. After he returned to his tents, he saw some policemen sitting at the back of their tents but he said they didn't suspect any misdeed until then.

Singh said, around 11 PM at night, the electricity was cut off while they were about to call it a night. He said he was caught by three to four policemen. In a quote to Newslaundry, he said, “They pushed me to the ground, and whenever I got up they kept pushing me back down. They started hitting and dragging me away from my tent. I had all my belongings, my clothes and money in the tent. I caught hold of the leg of a police barricade so that they wouldn’t drag me and I told them that I wouldn’t leave the ground.”

Singh added, "“A few times I managed to get out of the bus. I didn’t want to leave without my belongings. Then a policeman got very angry and twisted my elbow. I’m old but not a very weak man. I used to wrestle a lot, so I managed to unhook my elbow from his grasp. While I was doing so I touched the policeman’s uniform. I wanted to keep him away so he wouldn’t hit me. But as soon as I touched his uniform, he started screaming for help and shouted that I was assaulting him and trying to tear off his uniform.”

Eventually, he was taken to Tihar Jial.

What did the police say?

FIR against Gurmukh Singh was filed in Mukherjee Nagar Police Station. Moreover, he was booked under the charges of violating Covid protocol and assaulting a policeman.

FIR recorded a statement by Sub-Inspector Harbans Lal who said he was at a duty in Nirankari ground when some protesters wanted to go to Red fort where the protest turned amuck, when he tried to stop them, sub-inspector alleged that the protesters tore his uniform and assaulted him. After hearing his cry for help, his fellow policemen came to his rescue. His claim is backed by one of the other policeman.

One of the lawyers, Amarveer Bhullar, who is fighting his case belongs to a collective of lawyers team set up by Samyukta Kisan Morcha in collaboration with Delhi Sikh Gurdwara Management Committee (DSGMC). Amarveer said it took him two days to access the copy of the FIR. However, the Supreme Court in 2016 had ruled that the FIR shall be uploaded on police or government websites within 24 hours of registering a complaint.

Before getting bail, his bail plea was rejected on February 9 on the issue of investigations.

Gurmukh Singh served in army for 22 years but he is branded as a terrorist:

Singh says the police called him a terrorist while he served in the army for 22 years. He said he was recruited in the army druing 1962 Indo-China war. He was stationed at Nathu-La pass in Sikkim. He also fought in the Indo-Pak war in 1965 and later on, he was also a part of Bangladesh Liberation War six years later.

“I am not able to sleep at night these days,” he told News laundry when he recalled his 15 days at the prison. He said the toilets overflow in the prison and whenever he asked the officials to clean it, he would hear when the officials talking with each other and saying to keep him here to teach him a lesson.

Get the latest update about BlackLaws, check out more about FarmLaws & FarmerProtests News