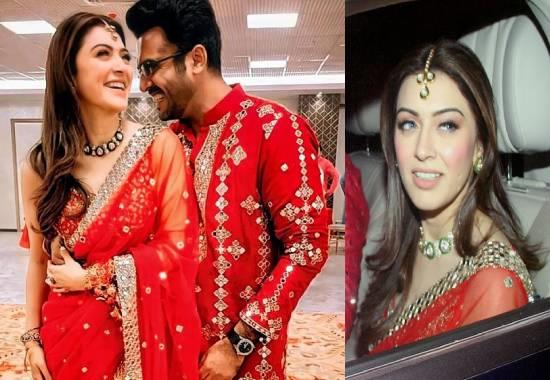 For the unversed, Hansika Motwani and Sohael Khaturiya's wedding is just two weeks away. On November 22, their pre-wedding festivities commenced with Mata Ki Chowki. Now, Hansika Motwani Mata Ki Chowki photos are going viral on social media with fans are mesmarised with the actress' beauty. In the viral pics, it can be seen, Hansika chose a bright red saree for the occasion and looked absolutely gorgeous. Sohael Khaturiya twinned with Hansika in a red sherwani with mirror details.

Who is Sohail Kathuria? Hansika Motwani's fiance who proposed her in Paris

Hansika and Sohael's grand marriage will take place at the 450-year-old Mundota Fort and Palace in Jaipur. The couple will take part in Sufi night on December 2, followed by Mehendi and sangeet on December 3. The next day, December 4, the haldi ceremony will take place, followed by the wedding in the evening and a casino-themed after-party at night. Further, Hansika and Sohael's family members will also enjoy a polo match together.

Who is Sohael Khaturiya?

Reportedly, Hansika and Sohael Khaturiya have been best friends for a while. They are also business partners and have planned several events in the past. Reportedly, Sohael is a Mumbai-based entrepreneur. After working closely together, they eventually fell in love with each other.