Sidhu Moose Wala Death Reason: His friend Gurvinder, who was with Sidhu Moosewala at the time of the attack, told the police in a statement that when the attackers started firing at the vehicle, they also fired two bullets at him. Author : Rohit Gupta 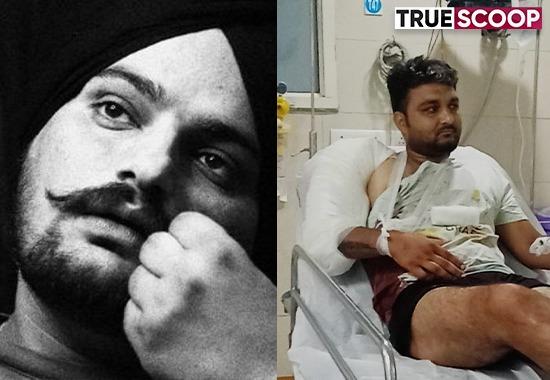 Sidhu Moose Wala Death Reason: His friend Gurvinder, who was with Sidhu Moosewala at the time of the attack, told the police in a statement that when the attackers started firing at the vehicle, they also fired two bullets at him.
Gurvinder has received bullet injuries in the attack and is admitted to the DMC Hospital in Ludhiana for treatment. Gurvinder said, 'I fired twice with my pistol, but the attackers surrounded the car from all sides and opened fire. One of the attackers fired from the front with an assault rifle, while the other opened fire from both sides. I bent down to save myself. The entire focus of the attackers was on Moosewala.
At the DMC Hospital in Ludhiana, the police had reached Gurvinder for questioning. He told in his statement that Sidhu Moosewala was going to his aunt's house. His aunt's house was nearby, so he did not take up both his security duties.
There was not even a place for him to sit in the second Thar car. Two of Moosewala's friends Gurvinder Singh and Gurpreet Singh are undergoing treatment at Dayanand Medical College and Hospital in Ludhiana. Both were brought to the hospital at around 8.30 pm last night.
According to the latest report, Gurvinder Singh (26) has been shot in the right hand while Gurpreet Singh (32) has been shot in the left arm and right thigh. Both of them had lost a lot of blood, after the blood transfusion, the condition of both is stable and out of danger. He has been admitted to the emergency. Today he will be operated upon and bullets will be removed from his body.
Dr Rajneesh Garg, Head, Department of Orthopedics, said, “At present we are doing all relevant tests to ensure that the relevant parameters are normal or not before the surgery.
Sitting judge will investigate while Punjab CM Bhagwant Mann has announced to get the singer Sidhu Moosewala murder case investigated by a sitting judge. Apart from this, the CM has also sought an explanation from the DGP in the matter of cutting Moosewala's security. In fact, in this case, Moosewala’s father had written a letter to the CM and demanded a sitting judge to investigate the matter.