“He is a traitor”, Ashok Gehlot slams Sachin Pilot denies his chances of becoming the new Rajasthan CM

Gehlot made extensive remarks on Rajasthan's Congress Crisis and over his former deputy Sachin Pilot clearing apart all the issues surrounding the state’s politics. 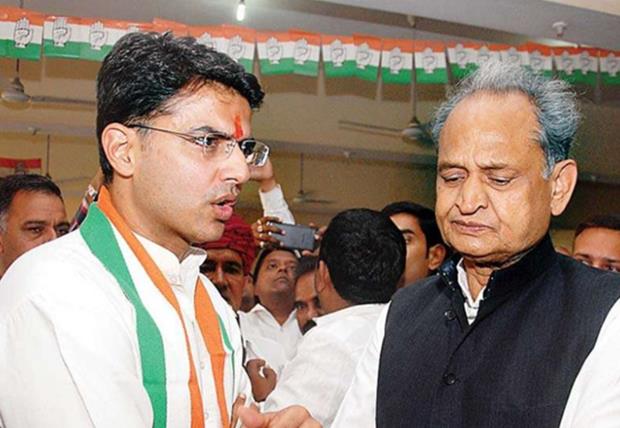 Ahead of Rahul Gandhi's Bharat Jodo Yatra coming to Rajasthan, a huge tussle has started once again in the Congress. In what can be marked as the biggest attack on Sachin Pilot, Chief Minister Ashok Gehlot launched a scathing remark saying how can Pilot be made the CM. How can people accept a man who does not have 10 MLAs, who have rebelled, who has been named a traitor?

Gehlot said that because of whom we stayed in the hotel for 34 days they were involved in toppling the government in the state, which also the involvement of Union Home Minister Amit Shah and Dharmendra Pradhan, Gehlot’s recent remarks came through an interview.

Over the question of Pilot not being accepted by his fellow loyalists, Gehlot said, How can they accept a man who tried to betray us, because of whom we (Gehlot and his MLAs) had to suffer staying in the hotel for 34 days?

On the question of disagreement with Sachin Pilot, Gehlot said – When Congress won 20 MPs from Rajasthan in the Lok Sabha elections in 2009, I was called to Delhi. When the working committee meeting was held, I was asked about making a minister from Rajasthan. Sachin Pilot is aware, I had recommended making Pilot a minister at the Centre. At that time 70 Gurjars were killed in the government of Vasundhara Raje, there was a quarrel between Gurjar-Meenas.

I received a call from Pilot who requested to recommend his name, which I had already done, the man who has affection for his fellow party members will only refer to the name of the young guns ahead.

Gehlot making a reference to the situation said, that the MLA got confused that Pilot was taking oath on the second day of the Legislature Party meeting. That's why 90 MLAs had gathered. They are all loyal and of high command. Because of which we stayed in hotels for 34 days, how would the MLA accept the one who conspired to topple the government?

Gehlot said that the rebel MLA had gone with Pilot in Manesar. The pro-Pilot MLAs were stopped in the resort where the Madhya Pradesh MLAs were accommodated. We could not expect the party president to join forces with the opposition to topple his own party's government. This has never happened in history to date. For this reason, the MLA was angry upon hearing the name of the pilot.

'Gaddar' can't be made CM: Gehlot tears into ex-deputy Pilot

He further added, that if he had apologized, I would not have had to apologize. The scenario would have stood different then, and what all happened on September 25th could have been averted. Being the leader of the Legislature Party, it was my moral duty, that meeting could not happen, so I apologized.

On the matter of making someone else the CM of Rajasthan, Gehlot said that I also say, make anyone out of the 102 MLAs who can save the government, but we have suffered the betrayal ourselves, we only know how we have spent those 34 days. I am ready even today if the high command asks, they must decide whether to keep me or someone else. If you think that some other face can win the election, then give him the charge.

Gehlot refuted all forms of allegations of sidelining Pilot and his loyalist MLAs saying there is no point in this happening. Gehlot added that his supporters have publicly accepted that all of their works are being accepted and done based on their call.

The MLAs of Pilot’s camp have personally said met Ajay Maken and said that there are no differences and issues against the Chief Minister and ever since returning to the party after the rebellion they have been treated well.

Two months ago, on September 25, the politics of Rajasthan got engulfed in a massive storm. It happened for the first time in the history of Rajasthan when despite the orders of the Congress’s high command, the proposal to give the authority to decide the chief minister could not be passed.

Chief Minister Ashok Gehlot was preparing to file a nomination for the post of Congress President. The high command's choice as chief minister in his place was Sachin Pilot, but the Gehlot camp was fuming over Pilot's name. Even before the Legislature Party meeting, about 92 MLAs of the Gehlot faction called a meeting at Minister Shanti Dhariwal's house and resigned together after reaching Assembly Speaker CP Joshi's house.