Hindu Raksha Dal claims responsibility of attack in JNU says the university is hotbed of anti-nationals, our workers attacked them

Hindu Raksha Dal has released a video of its leader Pinky Chaudhary claiming credit for the JNU violence that left at least 30 people, including students and teachers injured 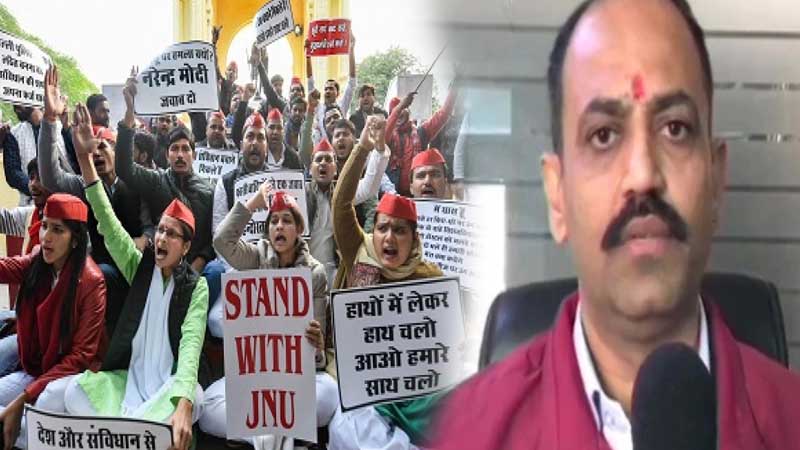 A fringe Hindu outfit that goes by the name of Hindu Raksha Dal has claimed responsibility for the violence in JNU and blamed the premier university for being a hotbed of anti-national activities.

Hindu Raksha Dal has released a video of its leader Pinky Chaudhary claiming credit for the JNU violence that left at least 30 people, including students and teachers injured.

In the video, Pinky Chaudhary says, "JNU is a hotbed of anti-national activities and we cannot tolerate this. We take full responsibility of the attack in JNU and would like to say that they were our workers."

"The way these people have been behaving over the years, especially the people in JNU, it is against our religion. We can never tolerate such anti-national activities," he said.

As per reports, government sources have said that the claims made by Hindu Raksha Dal chief Pinky Chaudhary are being investigated. Government officials have also said that Delhi Police has taken cognizance of the violence and in order to identity the masked men and women, police is taking the help of video and CCTV footage from Sunday.

Delhi Police has said that the claim made by Hindu Raksha Dal is being investigated.

The Hindu Raksha Dal leader also said, "These people live in our country, eat here, study here and indulge in anti-national activities. Hindu Raksha Dal will never tolerate this and again attack whoever tries such ideals."

"If in future others indulge in similar anti-national activities, we will again carry out a similar action in those universities. We take responsibility to carry out these actions," Pinky Chaudhary added.

A gang of masked men and women entered the JNU campus on Sunday evening armed with rods and sticks. They stormed through the campus attacking students and teachers and vandalising hostels and university property.

The vandalism continued for two hours while the JNU students called for help. Around 30 people, including JNUSU president Aishe Ghosh were injured in the violence.

Delhi Police has registered three FIRs in connection with the violence and the investigation has been handed over to the Crime Branch.