A poster was also seen in the hands of these people who came on the streets, on which I Support Nupur Sharma #ISupportNupurSharma was written. Author : Rohit Gupta 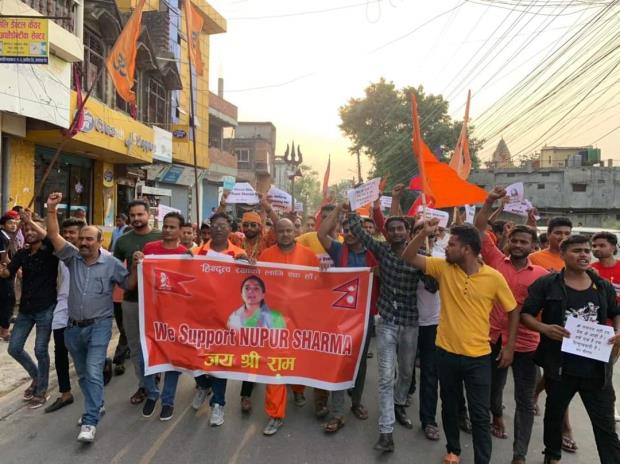 A rally has been taken out in many cities of Nepal in support of Nupur Sharma, former spokesperson of Delhi BJP, who came into Controversy by making objectionable statements on Prophet Mohammad.
Apart from Kathmandu in the capital of Nepal, hundreds of people took to the streets with saffron flags in many other cities including Birganj, and Peerganj. A poster was also seen in the hands of these people who came on the streets, on which I Support Nupur Sharma #ISupportNupurSharma was written.
Many pictures and videos of these rallies that came out in support of Nupur Sharma on the streets of Nepal are becoming viral on social media. In which people are seen supporting Nupur Sharma by raising slogans of Jai Shri Ram. While sharing these pictures, many users also wrote that Hindus of Nepal woke up but Hindus of India are sleeping.
Users also taunted when the rally was not taken out in India - A user named Sunita Patel, while posting a video of the rally taken out in Nepal, wrote that this is our neighbouring country Nepal, which performs duty like a younger brother. Look like the elder brother in our India no one took out a rally in favour of Nupur Sharma but our brothers of Nepal have started taking out rallies in favour of Nupur Sharma.
Violence erupted in many places in India over Nupur's comment - A user named Shivcharan Sudarshan Yadav posted several pictures of the rally and wrote that Hindu brothers in neighbouring Nepal took out a rally in support of Nupur Sharma.
Also Read: Nupur Sharma summoned by Mumbai Police on June 25
Even though there is a border between us, we are all brothers. On Friday, people of the Muslim community staged a tremendous protest in many parts of India regarding Nupur Sharma's statement. The ruckus in Jharkhand-Bengal had also flared up.
In Bengal, TMC filed a case against Nupur Sharma- A rally is being taken out in favour and opposition of Nupur Sharma regarding the rhetoric on the Prophet. Before Nepal, a rally was taken out in support of Nupur Sharma in Ahmedabad, the capital of Gujarat in India.
On the other hand, after Maharashtra, Hyderabad, a case has been registered against Nupur Sharma for his rhetoric against the Prophet. According to the information received, a complaint has been lodged by the TMC minority cell at the Contai police station in East Midnapore.
Watch Video: