Workers from Nitish Kumar's Janata Dal (United) party, an ally of the BJP, put up the poster, which reads, "Hisaab do, hisaab lo. 15 saal banaam 15 saal" at the Income Tax Chauraha 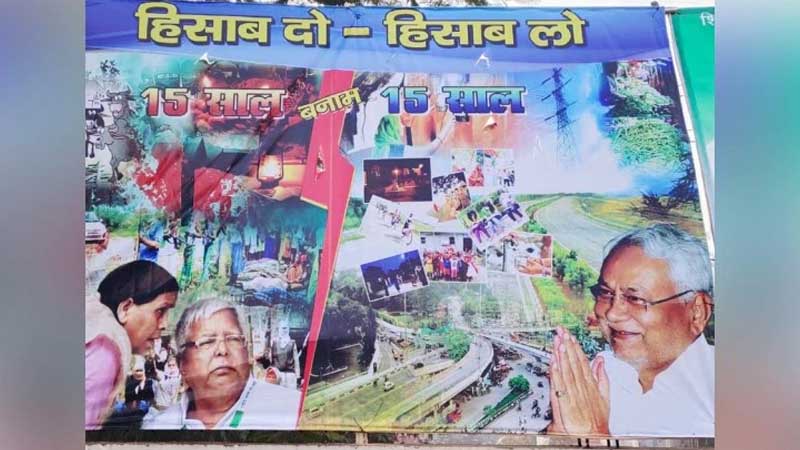 A poster flattering Bihar's chief minister, Nitish Kumar, and his governance record relative to Lalu Prasad Yadav's, was spotted today at a busy Patna roundabout in front of the Income Tax office.

Workers from Nitish Kumar's Janata Dal (United) party, an ally of the BJP, put up the poster, which reads, "Hisaab do, hisaab lo. 15 saal banaam 15 saal" at the Income Tax Chauraha. It's essentially an invitation to voters to compare Nitish's 15-odd years in power (with a brief stint by Jitan Ram Manjhi in 2014-15) with the Lalu Prasad-Rabri Devi era.

Keep in mind that Nitish Kumar was Lalu Prasad's ally between 2015 and 2017 before he returned to the National Democratic Alliance, the coalition led by the BJP.

Now, as Nitish Kumar faces a new assembly election, there have been signs of trouble within the Bihar NDA alliance.

Nitish's No. 2 in the JD(U), the election strategist Prashant Kishor (of "chai pe charcha" fame), provoked a sharp reaction from the BJP when he recently said the JD(U) should contest more seats.

As well, Kishor has been relentless and unsparing in his criticism of the amended Citizenship Act, which the JD(U) backed in Parliament and the National Register of Citizens. His boss recently turned down his offer to resign.

Bihar is expected to go to the polls in October.