The nude man LAPD viral video report suggest that the man vandalised and damaged the car of the Police department on which he started dancing. 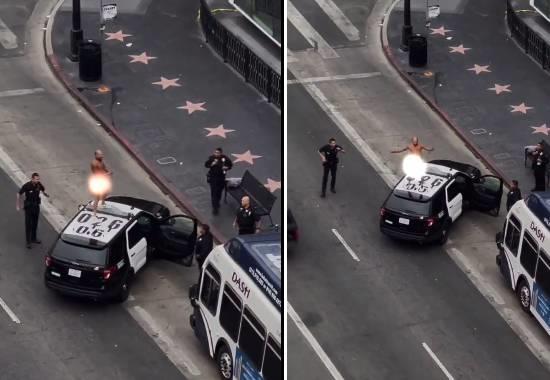 In a bizarre happening, the LAPD (Los Angeles Police Department) officials had to encounter an unexpected incident when a man started dancing on the roof of their cruiser in Hollywood, USA. The LAPD Naked man dance viral video has been doing rounds on social media with netizens querying why the man did such an act. The nude man LAPD viral video report suggest that the man vandalised and damaged the car of the Police department on which he started dancing.
As per reports, LPAD naked dancing man incident took place in Hollywood on Friday morning. The Hollywood nude dancing man viral video also shows the man climbing atop the cruiser near the intersection of Hollywood Boulevard and Argyle Avenue at 7:11 a.m. The video further shows that the LAPD officers requested backup in getting the man off the car after he started vandalising it.
Furthermore, the man was eventually kicked out of the car’s back window by the security personnel. Although the man was not identified, he was ultimately taken into custody and arrested for vandalism, Lee added.
Watch LAPD Naked Dancing Man Viral Video
Also Read: Texas Zoo captures alien-like 'strange-creature'; seeks city's help in identifying it; Watch