A man strangled his wife to death. 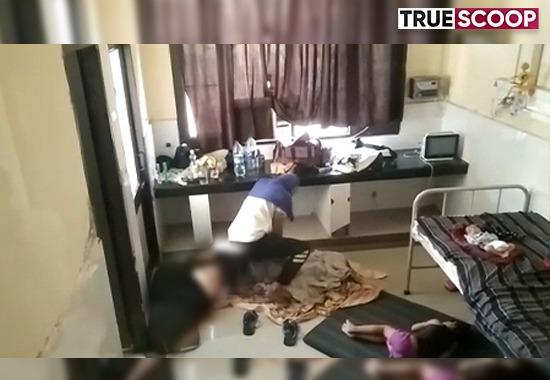 In a shocking incident in Kapurthala district of Punjab where a man strangled his wife. Interestingly, the incident took place in the gynic ward of the Civil Hospital in Kapurthala. A woman, who was under treatment at the Civil Hospital's gynic ward, was killed by her husband. It is said that the man was suspicious of his wife. As a result, he strangled and killed his wife. The video of the incident made by the hospital staff is going viral.
As per media reports, the couple had a love marriage a few years back. They already have a son. The deceased Balwinder Kaur, 24, had given birth to a boy four days ago. The incident was reported to the police by the Civil Hospital administration. Police reached the spot and took the accused into custody. The deceased was identified as Balwinder Kaur, 24, wife of Manjit Singh of Kesarpur village. The deceased had a cesarean section.
Also read: Explainer: Moosewala killing spreads fear in Punjab of Canada based gangsters, Sunawar Dhillon, Rinda & Goldie Brar
DSP Sub Division Surinder Singh said that Manjit Singh strangled his wife to death in private room 4 of the gynic ward of Civil Hospital around 6 am on Saturday. After receiving the information, the police team rushed to the spot and took the accused into custody. Accused Manjit Singh was suspicious of his wife, which led him to carry out the incident.