IFHE Hyderabad video is also going viral on social media in which Himank can be seen brutally thrashed in his hostel room. 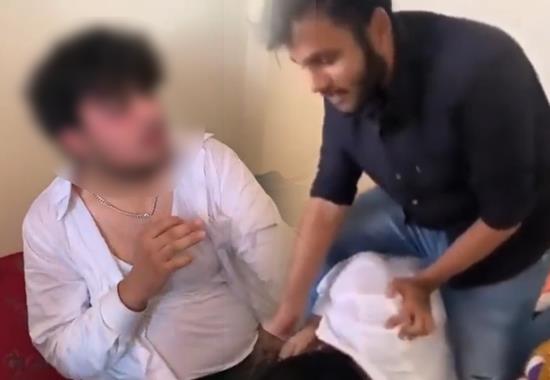 In what can be called an absolute blood-boiling incident, a student named Himank Bansal was allegedly assaulted and forced to chant 'Allah Hu Akbar' by senior students at IFHE Hyderabad. After being assaulted, Himank Bansal, student of BA-LLB, in his written complaint sent to the college administration stated that he was assaulted by senior students of the college on November 1, 2022, and also a video was recorded by them. Notably, IFHE Hyderabad video is also going viral on social media in which Himank can be seen brutally thrashed in his hostel room.

As per Himank's written complaint, around 20 students barged into his hostel room and started thrashing him. Not only this, Himank was forced to upload a Snapchat story showing his bruises. The law student further stated that when he asked the seniors why they are beating him down, he was reminded that he had referred Prophet Muhammad as a pedophile. In his written complaint, Himank also attached his exact remarks on Prophet Muhammad. The law student further informed that he was talking to a third-year student from the same college through private text on Instagram and 'mistakenly' made the remarks and did not realize that it would hurt religious sentiments.

The students who beat Himank also snatched his phone and read his WhatsApp texts and other social media messages. The student revealed that he deleted the text in fear of getting beaten once again, however, pointed out how his right to privacy was also breached. Himank also named a student saying they talked about on via private text, however, a screenshot was taken, and later it was circulated.

Video and photographic evidence of the assault has also been submitted to the police along with the complaint by Bansal. Following his complaint, the Cyberabad Police shared that a case has been registered on 11th November 2022 by Shankarpally Police Station against the culprits under the provisions of 307, 342, 450, 323, 506, R/W 149, IPC, and Sec 4(I),(II), and (III) of the Prohibition of Ragging Act of 2011.