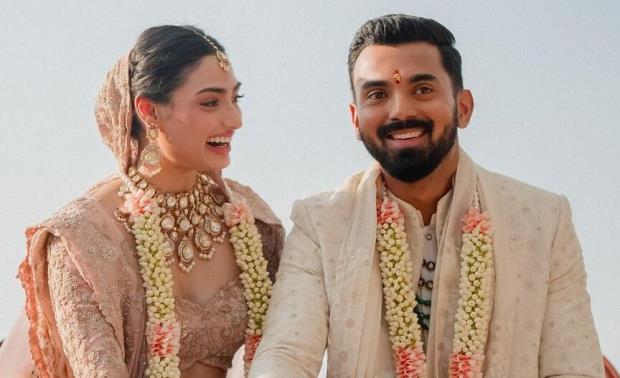 Athiya posted pictures with KL in wedding attire with a heartfelt note for her hubby, “In your light, I learn how to love…” Today, with our most loved ones, we got married in the home that’s given us immense joy and serenity. With a heart full of gratitude and love, we seek your blessings on this journey of togetherness.”

The much-awaited KL Rahul-Athiya Shetty wedding was concluded on January 23, 2023, at Suniel Shetty's Khandala residence. Veteran actor and father of the bride Suniel Shetty while talking to the paparazzi stated that KL Rahul and Athiya Shetty are officially married now and he is now a father-in-law. Suniel Shetty arrived with his son Ahaan Shetty to brief the media and also distributed sweets over his daughter's wedding.

Talking to the media, Suniel Shetty stated that KL Rahul and Athiya Shetty are now officially married. Suniel further stated that the entire function was a closed- ceremony that was attended by close family and friends. On being asked how different is he feeling, Suniel Shetty, stated that he is not feeling different as the role of a father and father-in-law always remains the same, and wholeheartedly welcomes KL Raul into his family.

Years after dating keeping their relationship extremely low-profile the duo finally read their wedding vows, beginning a most beautiful chapter of their lives. However, started getting much clear over time when Athiya accompanied KL on various occasions, including the latter treatment in Germany.

Suniel Shetty, however, clarified the duo will be throwing the wedding reception only after IPL 2023. He further added the couple will soon be posing for them once all the rituals gets over.