India has dismissed as "frivolous and pointless" Pakistan's attempts to raise the Kashmir issue while the UN General Assembly was engrossed in Russia's annexation of Ukrainian territories. Author : Rakesh Behal 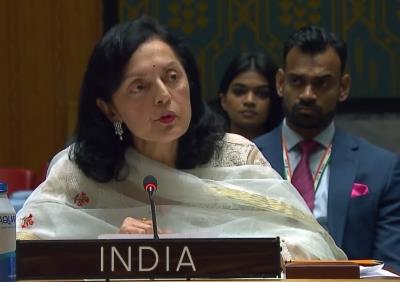 India has dismissed as "frivolous and pointless" Pakistan's attempts to raise the Kashmir issue while the UN General Assembly was engrossed in Russia's annexation of Ukrainian territories.

India's Permanent Representative Ruchira Kamboj on Wednesday poured ridicule on Islamabad's "mindset" that keeps bringing it up with 'falsehoods" regardless of the context, saying that it deserves "sympathy".

Pakistan should instead stop cross-border terrorism, she said.

Speaking after the Assembly had voted to condemn Russia's annexation of areas of Ukraine, Pakistan's Permanent Representative Munir Akram said he looked forward to "similar concern and condemnation about the attempts by India to formalise" what he termed the annexation of Kashmir.

In a muddled attempt at linking Kashmir to the Ukraine issue, he said that while Pakistan "endorses the basic principle reflected in the draft resolution that referenda cannot apply to people's and regions, which are part of a sovereign state and in an environment which is not free", it had abstained on the resolution.

Pakistan routinely brings up the Kashmir issue regardless of the topic at the UN or its relevance.

Kamboj told the Assembly, "We have witnessed, unsurprisingly yet again, an attempt by one delegation to misuse this forum and make frivolous and pointless remarks against my country."

"Such statements deserve our collective contempt and sympathy for a mindset which repeatedly utters falsehoods," she said.

Kamboj declared, "The entire territory of Jammu and Kashmir is and will always be an integral and inalienable part of India irrespective of what the representative of Pakistan believes - or covets."

"We call on Pakistan to stop cross-border terrorism so that our citizens can enjoy the right to life and liberty," she said.

Later exercising Pakistan's right of reply to her comments, Gul Kaiser Sarwani, a counsellor in that country's UN mission, repeated its standard statement about Hindutva, RSS, the BJP and cow "vigilantism" and what it asserts is the condition of minorities.

India also abstained with 34 countries on the resolution, which received 143 votes, with only four countries joining Russia in voting against it.

India maintains that a referendum would be irrelevant because the people of Kashmir have voted in elections in India and have elected their own governments.

Moreover, a Security Council adopted on April 21, 1948, that Pakistan disregards requires it to withdraw its troops and interlopers from all of Kashmir.