More than 200 students stuck at the Almaty airport in Kazakhstan following curbs in that country against the coronavirus pandemic are desperate to return home. 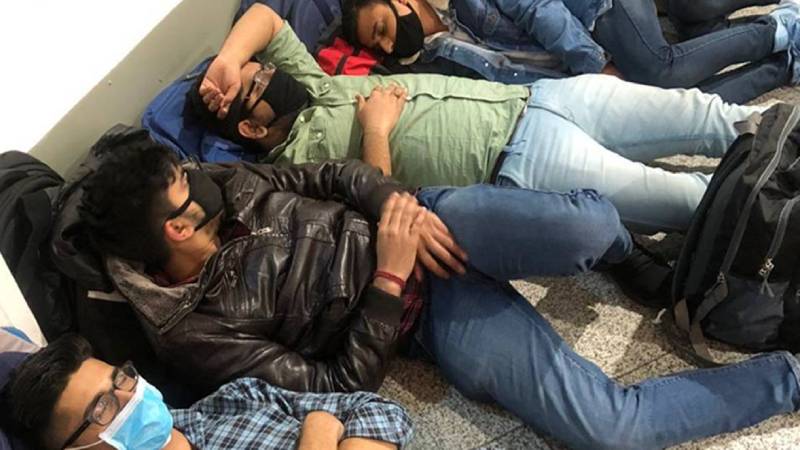 Forced to live in rented rooms near the Almaty airport, a student told IANS that local authorities were "harassing" them.

"They are misbehaving, heckling and abusing us... they are not giving us a clear answer and continuosly telling us to leave the airport. It's becoming very difficult as we are short of funds and live in rented rooms near the airport," Shaikh Zarinuddin Quraishi, a fourth year MBBS student at Semey Medical University, told IANS.

Narrating the scene at the airport five days back, Quraishi said, "When we reached the airport, there was a huge crowd of Indian students from different universities of Kazakhstan... there was a complete chaos. Airport officials and security persons guarding the airline's office were miserable; security people were misbehaving with us and weren't allowing us to go to the airline's office to know about our ticket and flight schedule status. We were completely helpless."

"We were trying to board the last flight. But the airlines, instead of rescheduling our tickets, demanded huge amounts -- Rs 50-60 thousand for an economy ticket and 1.20 lakh-1.50 lakh for an upgrade to business class. Even after paying up, the boarding officer refused to issue boarding passes to some of my friends, saying seats were unavailable. They were cancelling pre-booked tickets and issuing new tickets to make a fast buck," he said.

"One of my friends started crying as his ticket purchased a week before was cancelled at the boarding counter," he said.

Quraishi said the Indian embassy was cooperative, but the officials were unable to intervene as the embassy is in Astana (Nursultan) and the students were stranded at Almaty. "They were taking our calls and secretary Ramalingan was always there to answer us," he said.

He said noe of them has so far been tested for COVID-19, saying it would happen once they land in Delhi. "We would definitely undergo all security checks and medical inspection for COVID-19. We are studying medicine here and we are future doctors, so we are aware about the spread of the disease. And above that, we all are humans and we care for our health as much as for our family and others around us. We are ready to go for quarantine if required," Quraishi said.

Another desperate MBBS student from Semey University said, "Take us back from here to India. We are not safe here, our lives are at risk."

"We are living in groups in different places near the Almaty airport. The officials have told us to take up our case with our government," he added.

He alleged that even renting rooms is a big problem because of discrimination. "We were turned out from our rented accommodation at night and the owner charged us heavily the next day when we left," he said.

Earlier in the day, the Delhi High Court directed the the government to appoint a nodal officer from Indian embassy in Kazakhstan to ensure the safety and well-being of Indian students stranded at Almaty airport due to corona outbreak.

A division bench of the High Court presided over by Justices Siddharth Mridul and Talwant Singh asked the government to communicate the details and other necessary particulars of the nodal officer so appointed, including his name and telephone number, to the students stranded there.

The bench asked the authorities to expeditiously provide students with basic amenities and humanitarian assistance in terms of food, medical care and lodging and transportation, as may be necessary.

The court also directed the Centre that the details can also be uploaded on the official website of the Indian Embassy in Kazakhstan as well as on the website of the Ministry of External Affairs.

The court was hearing a petition filed by Sehla Saira through advocate Fouzia in which the bench was informed that several Indian students, who are enrolled for higher studies,including MBBS, at Semey Medical University in Kazakhstan are stranded without food, water, transportation and medical aid.