India's biggest Sports University and an Int'l Airport to be built in Jalandhar if AAP comes to power: Arvind Kejriwal

The entire Jalandhar city was painted in the color of patriotism, on Wednesday, with tricolor in hands and reverberating slogans of Bharat Mata Ki Jai. 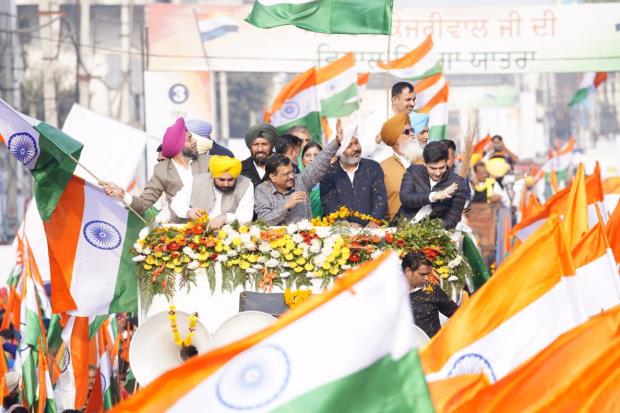 The entire Jalandhar city was painted in the color of patriotism, on Wednesday, with tricolor in hands and reverberating slogans of Bharat Mata Ki Jai. This was the view of the Tiranga Yatra (Tricolor Procession) organized by the Aam Aadmi Party in Jalandhar, which was led by Aam Aadmi Party’s National Convener and Delhi Chief Minister Arvind Kejriwal, who is on a two-day visit in Punjab and marched across the city with thousands of enthusiastic AAP workers and supporters.
Thanking the people of Jalandhar, Kejriwal said, "It is a wonderful tricolor procession. The people of Jalandhar showered us with lots of love and blessings. We want to make Punjab prosperous. We want to take the state forward by establishing peace and brotherhood here." Promising the people of Jalandhar, Kejriwal said, "India's biggest Sports University will be built in Jalandhar when the Aam Aadmi Party government is formed in Punjab in 2022.
With the announcement of Sports University, Kejriwal made another announcement saying, Doaba is a stronghold of non-resident Indians (NRIs). People here have to go to Delhi, Chandigarh and Amritsar to catch flights. The people of Jalandhar will not have to travel far to catch a flight after the formation of the Aam Aadmi Party government. He promised that 'Aap Ki Sarkar' will build an International Airport in Jalandhar for the convenience of the people here.
Referring to Babasaheb Dr. Bhimrao Ambedkar, the architect of the Constitution of India, Kejriwal said that despite being born in a poor Dalit family, Babasaheb had many higher educational degrees, including degrees from many foreign universities. Babasaheb's wish was that the whole country should become educated. Be it rich or poor, upper caste or lower caste, everyone should get equal education. Our Delhi government gave utmost importance to education to make India of Baba Saheb’s dreams and provided opportunity to all students to get world-class education. With the formation of the AAP government, the government education system in Punjab will also be reformed and improved. The maximum benefit of which will be given to the children of poor families. Kejriwal said that the darkness of poverty in the country can be eradicated only with the light of education and we are working on this mission.
Two children, who came in the march, gave their piggy bank money to Kejriwal as their contribution to party fund and wished him all the best for the party’s success in 2022 elections. Kejriwal thanked the children and said, "We will win the elections of Punjab with this money."
AAP's Punjab President Bhagwant Mann, who was accompanying Kejriwal during the procession, said that we have wasted too many opportunities on Akali-BJP and Congress, but the shamelessness of these parties knows no bounds as they are asking for another opportunity. In 2022, the people of Punjab will give a chance to their progress and form an honest government. He said that the Jharoo (AAP’s party symbol broom) of the Aam Aadmi Party will clean the political dirt of the entire country.