Infighting escalates in Punjab Congress over ‘CM face’ issue, Rawat says 'I know when & what to say'

Navjot Sidhu's close aide, Punjab Congress General Secretary Pargat Singh challenged Harish Rawat's statement and asked him to explain when it was decided that Capt Amarinder will be the face of upcoming polls. 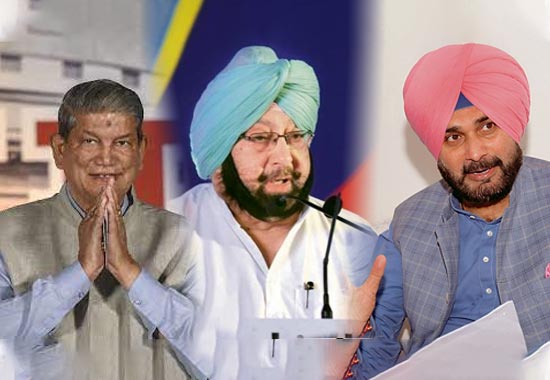 Navjot Sidhu's close aide, Punjab Congress General Secretary Pargat Singh challenged Harish Rawat's statement and asked him to explain when it was decided that Capt Amarinder will be the face of upcoming polls.

As Sidhu’s camp opened a front against Rawat, he said, “We've many national faces including Sonia & Rahul Gandhi. At the local level also, we've several faces like Captain Amarinder Singh, Navjot Singh Sidhu, even Pargat Singh himself. Rawat continued saying that “one should not be impatient. I know when & what I need to say.”

Earlier, Pargat has said, “When all the MLAs had met the three-member Kharge Committee constituted by the party high command in Delhi three months ago, it was decided that the Punjab 2022 elections would be fought under the leadership of Sonia Gandhi and Rahul Gandhi. Now, if Harish Rawat is saying that the polls will be fought under the leadership of Chief Minister Captain Amarinder Singh, then he should also tell when this decision was taken."

In a day or two, Rawat will visit Punjab, where he will meet with Chief Minister Amarinder Singh as well as state party president Sidhu to bridge the gap between the two.

The last month has proved extremely difficult for Capt Amarinder as well as Congress. With less than six months in state polls, the party leadership has failed in manifesting a united image in Punjab.

Despite best efforts to placate factions, first by appointing Sidhu as PPCC president and later by declaring Amarinder Singh as the party's election face, things have not gone as planned. If the situation is not reined in time, the party might face heavy loss in polls.