Is Deepika Padukone a right choice to essay the role of Kapil Dev’s wife? Read here

The film is about India’s iconic win in World Cup 1983. Ranvir Singh looks like a mirror image of Kapil Dev. 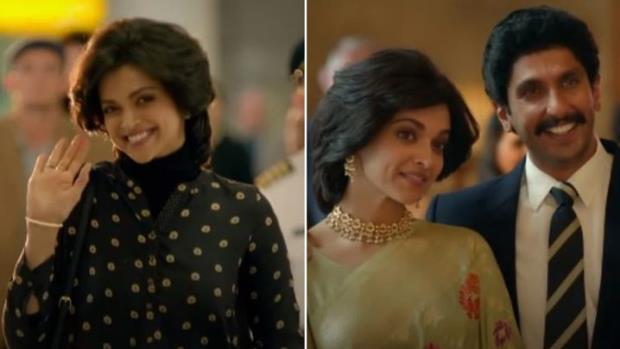 Ranvir Singh starrer ‘83’ is out in theatres. The film is greatly appreciated by the audiences. Ranveer Singh plays the role of cricket legend Kapil Dev, while Deepika Padukone plays the role of his wife, Romi Bhatia.
The film is about India’s iconic win in World Cup 1983. While Ranvir Singh looks like a mirror image of Kapil Dev, Deepika Padukone received mixed reactions from the audience. Though she tried her best to fit in the role of Romi Bhatia, still people are wondering if there was a need for Deepika to do such a short role in the movie.
Let us tell you that the joys, sorrows, humour, victory, defeat, personal experiences and much more are amazingly captured and delivered. From the first scene, it’s clear that no one believed Team India will win 83 World Cup. Their struggles to lift the cup will leave the audience with teary eyes.

Kabir Khan has focused on every player and made them stand out by giving a power-packed performance. The epic journey of the Indian cricket team from underdogs to true winners will surely give you goosebumps. The aesthetics were kept very simple and little incidents from players' life were put together to help the viewers to feel their experiences.

Ranveer Singh really put up a good show and did a tremendous job as Kapil Dev. But the film has entirely focused on a man’s mindset and what a leader can achieve if he knows how to lift his team and when he sees nothing but victory.

Kabir Khan has shared the real snippets of the World Cup in the movie. They have tried to make a connection between the reel and the real Kapil. When the actual Kapil Dev catches a six that Ranveer Singh throws, that moment is significantly captured.

Deepika did a perfect job as Kapil Dev’s wife but her role was quite short in the movie. Not sure if Deepika suited her role or any other actress could have pulled off the role well? Audiences can decide it well.
The end of the movie brings every Indian together rising above religion and caste. How Indira Gandhi used this big sporting event in her interest to combat communal problems and overcome violence without the use of force.
The film did total justice in capturing and delivering all the incidences in a rightful manner on the big screen.