Janhvi Kapoor Latest Photos: Bollywood actress Janhvi Kapoor is one of those actresses who balance both style and comfort. 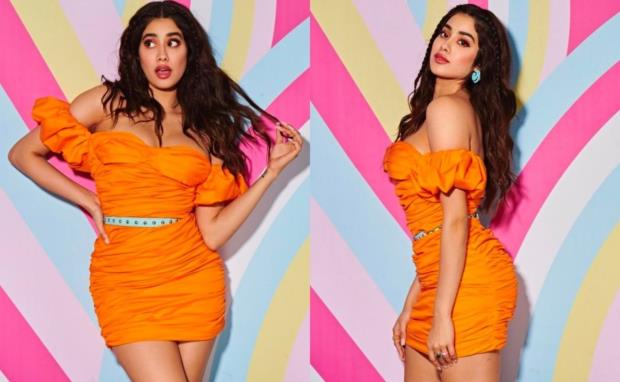 Janhvi Kapoor Latest Photos: Bollywood actress Janhvi Kapoor is one of those actresses who balance both style and comfort. Janhvi Kapoor, who rules the hearts of fans with beauty and cute style, remains actively connected on social media.
Janhvi Kapoor keeps sharing her bold pictures and videos on social media every day. At the same time, people's hearts beat faster. Janhvi Kapoor's latest photoshoot pictures have surfaced once again. Now, these pictures are becoming very viral on social media.
Recently Janhvi Kapoor shared her latest pictures on her Instagram account. In which she is wearing an off-shoulder dress of orange colour. Janhvi has done glossy make-up for her complete look and has left her hair open.
In which she is looking very beautiful. Janhvi Kapoor has given different poses in these pictures. In these pictures, Janhvi is showing her ravishing looks.
At the same time, Janhvi's cute smile has come to the fore in the picture. These pictures of the actress are being liked a lot by her fans. Fans are no longer taking their eyes off these pictures.
Also Read: Varun Dhawan and Janhvi Kapoor starrer 'Bawaal' goes on the floors
Millions of likes have come in a few minutes. Fans are also commenting heavily. One user wrote - looking beautiful, the same other user wrote - cute smile. Many big celebs have also commented with the fans.
Janhvi Kapoor's Upcoming Movies
Talking about Janhvi Kapoor's films, she is working with Varun Dhawan in the film Bawaal. Apart from this, she is in discussion with Rajkumar Rao about 'Mr and Mrs Mahi', Aanand L Rai's 'Good Luck Jerry'. The last time the actress was seen in the film Roohi.