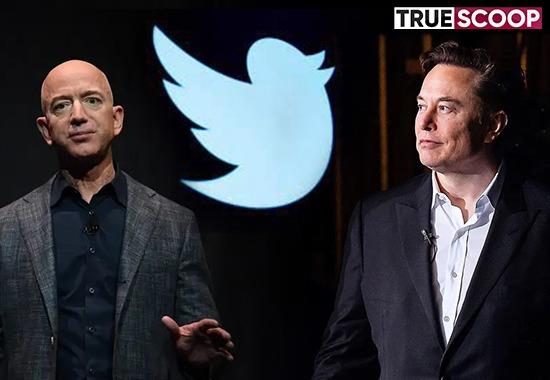 Twitter has been bought by the world's richest businessman Elon Musk for $44 billion. This deal to purchase the microblogging platform will be completed by the end of this year.
Meanwhile, the world's second-biggest businessman Jeff Bezos has given his reaction to this deal.
Jeff Bezos has asked in a post on Twitter whether China could benefit from Elon Musk's $44 billion cash deal to buy Twitter.
According to the source, Elon Musk's purchase of Twitter has sparked a debate on whether the deal is right for the social media network. In many countries, Twitter has been a topic of discussion regarding freedom of expression and the spread of misinformation.
The social media platform is also grappling with issues related to content moderation. On the other hand, if we talk about China, then Twitter is banned here, but Musk's business is heavily dependent on it.
Amazon founder Bezos responded to the news in a series of tweets just before Musk spoke of the Twitter acquisition, emphasizing the Tesla CEO's business interest in out its expansion in China and support from the government there.
Also Read: Saudi Prince Al Waleed opposes the deal, bulldozed by new Twitter owner Elon Musk, I reject offer: Talal
Bezos was responding to a New York Times reporter who highlighted Tesla's operation in China and that the government in the country had banned Twitter.
Interesting question Will the Chinese government benefit from this?
Musk, who has been critical of Twitter's content moderation policy, struck a deal on Monday to buy the social media platform.
Musk's ownership of Twitter is expected to lead to less moderation and that those banned, including former US President Donald Trump, will return.
There is also the question of what the deal will mean for Twitter's China content policy as Musk's Tesla production and vehicle sales are heavily dependent on China.
Tesla's second-largest market in 2021 was China. The Chinese battery maker is the main supplier for Tesla's EVs. After 2009, when China banned Twitter, the government there had no control over the platform, which can change now. Bezos also made two more tweets after this.