Jeremy Renner India visit reason has been creating curiosity among fans and 'Hawkeye' has been posting about it on social media. 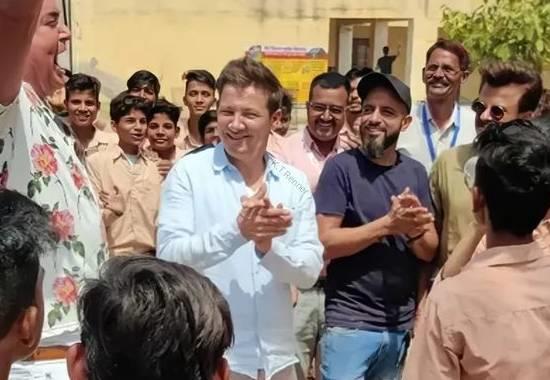 Hollywood actor Jeremy Rener has been trending top in India ever since the Avenger fame star shared his pictures of his visit to Rajasthan. Jeremy Renner who plays the character of Hawkeye in Marvel's superhero flick Avengers & more recently shared his photos of his visit to India. Ever since then, fans are eager to know about Jeremy Renner India visit reason. Jeremy Renner India visit reason has been creating curiosity among fans and the actor has been posting about it on social media.
For those who cannot keep calm and wondering about Jeremy Renner visit to India can read further:
Jeremy Renner India Visit Reason Revealed
Jeremy Renner on Wednesday took to his Instagram and kept sharing updates of visit to India. In fact, the 'Hawkeye' also expressed reacted on the ongoing heatwave in India. Furthermore, Renner tried his hands in gully cricket in Rajasthan. Later, Renner shared a video stating that something big is going to be revealed and later his pictures shooting with Bollywood actor Anil Kapoor went viral in no time.
Lifting the curtains up, Hawkeye India visit reason is to shoot for his upcoming web series Rennervations. Multiple fan pages shared photos of Anil Kapoor and Jeremy Renner shooting together in Alwar, Rajasthan. In a video shared by a fan from Alwar, Anil is standing leaning on a wall with a crew member holding a fan for him to help him beat the heat. As per the video’s caption, he shot at Dholagarhi Devi Temple in Alwar. In other videos and pictures form the shoot, both Jeremy and Anil were shooting at what appeared to be a school.
It is pertinent to mention here that Jeremy Renner and Anil Kapoor acted together in Hollywood movie Mission Impossible: Ghost Protocol. However, Renner and Anil did not shared the screen even for once. Now, it seems like the wait for fans to Jeremy and Anil together is now over.
Jeremy Renner India visit: Hawkeye in India
Also Read: Marvel star Jeremy Renner aka 'Hawkeye' plays gully cricket with kids in Alwar, chit-chats with lizard; Watch