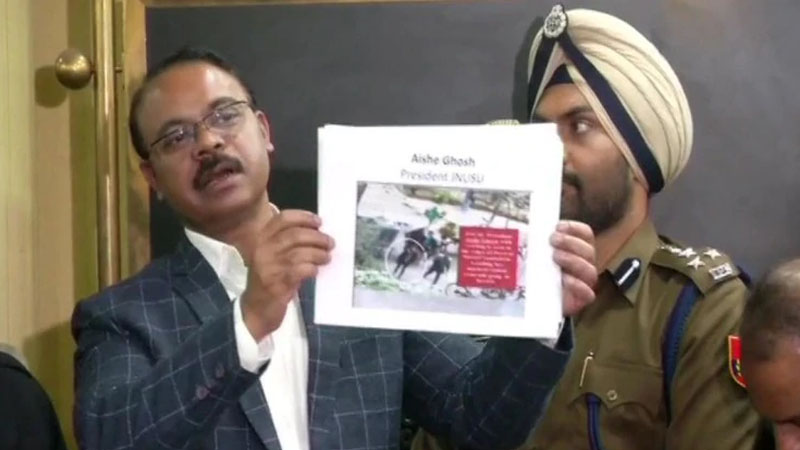 Police have released photographs of nine suspects responsible for violence at Jawaharlal Nehru University last week. Mostly students are linked to the Left-controlled students' union but giving few details on the attack by a masked mob on students and teachers on Sunday evening.

Aishe Ghosh is the president of the Left-controlled JNU students' union while Yogendra Bhardwaj and Vikas Patel are said to be members of the BJP-linked Akhil Bharatiya Vidyarthi Parishad or ABVP.

According to the Delhi Police, Aishe Ghosh and other members of the Left groups attacked the server room at JNU to stop online registrations and enforce a strike over their protest against the increased fees.

The police admitted that it was facing difficulty in identifying those responsible for the attack on Sunday because of a lack of CCTV footage, authenticated video recordings and witnesses.

At a news briefing, Aishe Ghosh denied the police charges and said she had gone to the scene to stop the violence. "I was not wearing any masks, I have done no wrong... I still have my blood-soaked clothes," she said.

The two cases against Aishe Ghosh and other left students for the clashes on Friday and Saturday were filed by the police within a span of four minutes on Sunday evening, shortly after she was taken to hospital bleeding from an attack by a masked mob.

The JNU students union has been protesting against a hostel fee hike and had allegedly stormed into the server room to block the registration process on Sunday afternoon. There were clashes between the JNU students and the ABVP at the time.

There were no names in the third FIR, filed on the mob that barged into the campus and attacked students and teachers with sledge-hammers and iron rods.

The police have also been accused of letting them slip out of the JNU campus after a three-hour rampage. While JNU students have accused the ABVP of involvement in the attack in their complaints to the police, the student body linked to the ruling BJP has denied any involvement.