Internet services have been suspended in Rajasthan's Jodhpur after violent clashes erupted between two groups over the issue of hoisting a flag. 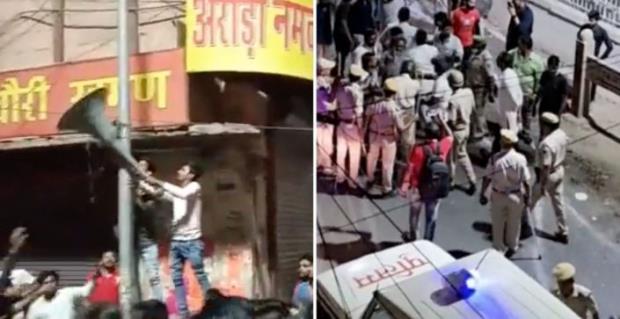 After Monday's clashes in Rajasthan's Jodhpur, stones have been pelted at the police today at Jalori Gate, compelling the police to resort to lathi-charge.
After the incident that took place on Eid, Chief Minister Ashok Gehlot tweeted, "It is unfortunate that tension has arisen due to the clash between two groups at Jalori Gate, Jodhpur. The administration has been instructed to maintain peace and order at all costs. Respecting the tradition of love and brotherhood of Jodhpur, Marwar, I make a touching appeal to all the parties to maintain peace and cooperate in creating law and order."
Internet services have been suspended in Rajasthan's Jodhpur after violent clashes erupted between two groups over the issue of hoisting a flag.
Stone-throwing and more violence was reported from five areas, while the police used force to bring the situation under control.
Also read: 2 groups clash in Jodhpur, Internet services suspended
The namaz for Eid was offered under police protection.
Local sources confirmed that some people were raising flags at the Jalori Gate intersection. At this time, a person making a video was beaten up by some youths. When some people came to his rescue, they were also attacked. Soon, the other faction started pelting stones.
This commotion continued till late midnight and over a dozen people were reportedly injured.