The injured dog is for the time being undergoing treatment and a case has been registered against the doctor under section 11 of the Cruelty to Animals Act and section 428 of the IPC. 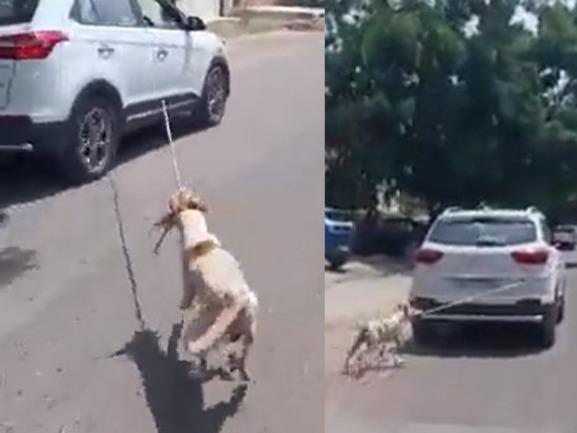 All the limits of cruelty were crossed in the video surging up from Jodhpur of Rajasthan. A few days back different cases of dogs being dangerous to humans came up, but the latest viral video shows how ruthless people can be when it comes to the treatment of animals.

The heart-wrenching video shows a dog being tied to the car and being dragged by the driver for a really long stretch. Reportedly, the dog was dragged for 5 kilometers which left him seriously injured. As soon as the passerby saw this heinous sight, they got the car stopped and called the police. Maneka Gandhi has also spoken about the matter, she has called the police and has got the case of cruelty against animals registered.

According to the information received, the accused has been identified as Dr. Rajneesh Galwa who is a plastic surgeon by profession. Reportedly, the dog used to come to his place very often. The same thing happened the very same day, but he tied a rope around the dog’s neck and then tied that rope to his car, after which he started driving the car at a very high speed. The helpless dog could have done nothing, so kept on running in scorching heat for 5 kilometers.

Seeing the dog in such a condition, people tried to stop the car but the driver refused to listen to anyone. After this, a biker stopped his vehicle in front of the car which caused him to stop at the spot. The accused later got into a heated argument with the people who tries stopping him. The Dog Home Foundation was informed of this case and the complaint was registered against the doctor.

Shameful" #ViralVideo from #Jodhpur
A person from Jodhpur, who describes himself as Dr #RajneeshGwala , tied the dog to his car and ran. Animal seriously injured. pic.twitter.com/CcaslApkX0

The injured dog is for the time being undergoing treatment and a case has been registered against the doctor under section 11 of the Cruelty to Animals Act and section 428 of the IPC.