John Abraham and his wife Priya tests positive for Covid-19

The actor shared the details on his social media account. 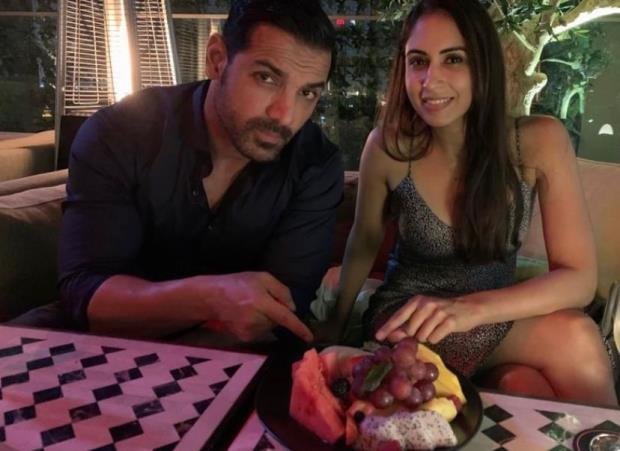 Bollywood actor John Abraham tests positive for Covid-19. Not only him, but his wife also tested positive. Both are home quarantined at present.
Satyamev Jayate actor shared this news on his social media handle. In his Instagram post, John wrote, “I came in contact 3 days ago with someone who I later learned had Covid. Priya and I have tested positive for Covid. We have been quarantined at home so haven't been in contact with anyone else."
“We are both vaccinated and experienced mild symptoms. Please stay well and healthy. Masks up," he added. 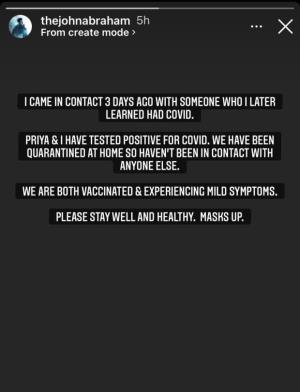 Recently, many Bollywood actors tested positive for Covid-19. Last week, Mrunal Thakur, Nora Fatehi and Shilpa Shirodkar tested positive.
Earlier, Arjun Kapoor, his sister Anshula, Rhea Kapoor and her husband Karan Bhoolani tested positive.
.
Kareena Kapoor and her best friend Amrita Arora also tested positive but now, they have tested negative after following Covid guidelines.
Also read: Russia reports 18,233 Covid cases
John celebrated his birthday in December. He shared a plethora of pictures with his wife on that day. The actor was last seen in Satyameva Jayate 2, with Divya Khosla Kumar. He had a triple role in the film.  It was an action-packed movie, full of ‘masala, masala and masala’. The film was written and made in the style of the 1980s. Writer-director Milap Zaveri and his team have left no stone unturned to preserve and maintain the same theme as of ‘Styamev Jayate’. The film 'Satyamev Jayate 2' was a tribute to Manmohan Desai in a way. This was a film in which all the mistakes of the script get lost in the noise of its protagonist.