In the latest, amid the ongoing row between Centre and judiciary over appointment of judges, Union Law Minister Kiren Rijiju on Monday said judges do not contest elections or face public scrutiny. Author : Rakesh Behal 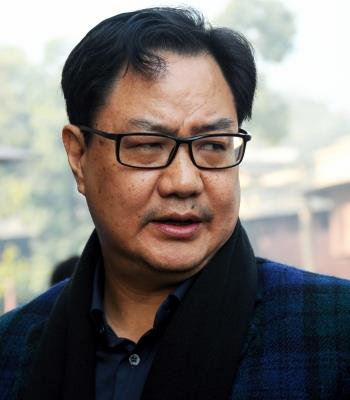 n the latest, amid the ongoing row between Centre and judiciary over appointment of judges, Union Law Minister Kiren Rijiju on Monday said judges do not contest elections or face public scrutiny.

Rijiju said he had participated in many events which include Supreme Court Chief Justice and Supreme Court judges and high courts, even there he had emphasised that today he is working as Law Minister but tomorrow if people do not elect his government, then they would sit in the Opposition, and they will question the ruling government.

"But, when a judge becomes a judge, he does not have to face an election. There is also no public scrutiny for judges. That is why I say, people do not elect judges and this is why the public cannot change judges. But people are watching you. Your judgment and the working of judges and the way judges dispense justice, people are watching it and assess... They form opinions. In the age of social media, nothing can be hidden," he said to loud applause.

He further added that the Chief Justice had sought his help in connection with the abuse judges face on social media. "How to control that? Now, judges cannot respond to it on social media. The government was requested to take a firm step... I have taken note of it," he added.

The Law Minister on Sunday cited comments by a retired high court judge, saying the Supreme Court "hijacked" the Constitution by deciding to appoint judges itself - and said he considered the former judge's view "sane". The Law Minister said the majority of the people have similar sane views.A

Sharing the interview of justice R S Sodhi (retd), a former judge of the Delhi High Court, Rijiju tweeted: "Voice of a judge...Real beauty of Indian Democracy is- it's success. People rule themselves through their representatives. Elected representatives represent the interests of the people & make laws. Our Judiciary is independent and our Constitution is Supreme".