Justin Bieber reveals right side of his face paralyzed due to Ramsay Hunt Syndrome, watch video

Bieber has been diagnosed with Ramsay Hunt Syndrome. 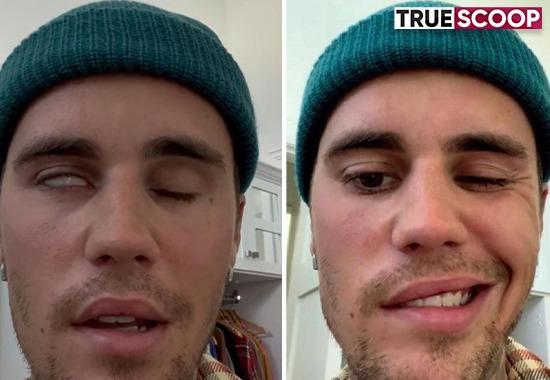 International pop star Justin Bieber has revealed that he has partial facial paralysis due to a condition called the Ramsay Hunt Syndrome. In a video he shared on his Instagram account today, the 28-year-old told his fans that he will have to cancel shows because he has been diagnosed with a rare disorder that paralyzed half of his face.
"For those who are frustrated by my cancellations of the next shows, I'm just physically, obviously, not capable of doing them", Justin Bieber said, pointing to the lack of movement on one side of his face. "This is pretty serious, as you can see."

After he canceled his shows in Toronto and Washington, D.C., the pop star Justin shared the video. The singer explained in the video that he could barely move one side of his face, calling the disease “pretty serious”. He captioned it, “IMPORTANT PLEASE WATCH. I love you guys and keep me in your prayers”.
The condition that led to Justin Bieber's facial paralysis is a rare neurological disorder caused by the varicella-zoster virus, this is the same virus that causes herpes zoster and chicken pox.
"The virus that can remain dormant in a person who has had chickenpox as a child," US-based National Organization for Rare Disorders said. "The reason why the virus reactivates and affects the facial nerve in Ramsay Hunt syndrome is unknown."
Symptoms of Ramsay Hunt Syndrome
Symptoms of the ailment include drooping, paralysis, and weakness on one side of the face, which leads to difficulty in eating, emoting, and closing the eye.
This disorder also leads to rashes on the ear, tongue, pain in the ear, and vertigo. Rarely, symptoms of Ramsay Hunt Syndrome include dry eyes and mouth and loss of taste.
How is it diagnosed and treated?
To diagnose Ramsay Hunt Syndrome, health professionals conduct blood tests for varicella-zoster virus, MRI of the head, and some skin tests.
For treatment, patients are prescribed anti-inflammatory and antiviral medicines. They are advised to wear eye patches to ensure there is no corneal injury.