This aggressive look of Salman with long hair, cool sunglasses and a steel rod in his hand is giving a glimpse of the action dose of the film. 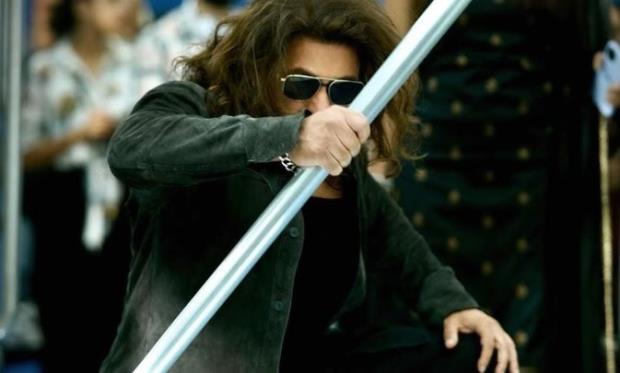 Kabhi Eid Kabhi Diwali First Look: There is a lot of buzz about Salman Khan's upcoming film Kabhi Eid Kabhi Diwali. Till now there was discussion on the cast and Salman of the film.
Now Salman's first look at the film has also been revealed. The aggressive look of Salman with long hair, cool sunglasses, a steel rod in his hand is giving a glimpse of the action dose of the film for his new movie.
Meanwhile, Salman's face is not very much visible in this new photo shoot as he can be seen in all-black look, but his anger can be gauged from his action.– He shared a post on his social media account: 'Shooting for the new film started...' Now Bhaijaan is visible and the fans do not say anything, this cannot happen.
His loving Users have praised Salman fiercely. One user wrote - 'Salman Bhai is fire, everything is ashes in front of him.' One wrote - 'Dangerous'. Another user wrote - 'Sher came Sher'. Many other users have tied bridges of similar praise.
Kabhi Eid Kabhi Diwali: Pooja Hegde also shared the first look
The film's heroine Pooja Hegde also shared Avna's first look from the film. Flaunting a black shirt, open hair and Salman Khan's signature bracelet in her hand, Pooja had informed about the commencement of the shooting of Kabhi Eid Kabhi Diwali. Now the first look of both the leads of the film has been released. Fans are liking Pooja's lovely look on one side and Salman's dangerous look on the other.
Shehnaaz Gill's Bollywood Debut with Salman Khan
Apart from Salman and Pooja, Kabhi Eid Kabhi Diwali, being directed by Farhad Samji, also stars Aayush Sharma. Interestingly, through this film, Bigg Boss fame Shehnaaz Gill is making her Bollywood debut.
Shehnaaz Gill becomes a very close friend of Salman and working with a superstar like Salman in his debut film is no less than an achievement for him. Recently, Shehnaaz was also seen with Salman at EID party.
The Bhaijaan has a long schedule for work front, apart from the film 'Kabhi Eid Kabhi Diwali', Salman Khan is also going to be seen in the film 'Tiger 3', in which Katrina Kaif is going to be seen with him. Along with this, Salman also has a film to do in Telugu film 'God Father'. Salman Khan will get to see a cameo role in the film. 'God Father' is his Telugu debut film.