Kabul Gurudwara Attack Live Updates: There is news of a terrorist attack on the Karte Parwan Gurdwara Sahib in Kabul, the capital of Afghanistan. 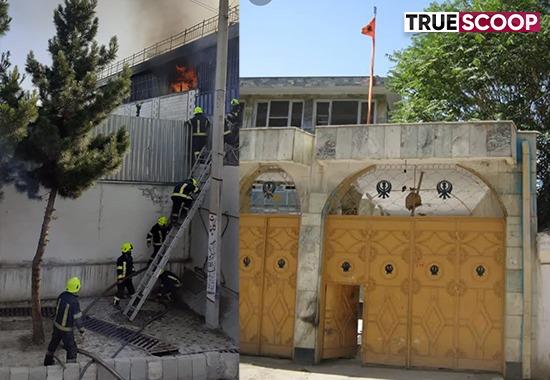 Kabul Gurudwara Attack Live Updates: There is news of a terrorist attack on the Karte Parwan Gurdwara Sahib in Kabul, the capital of Afghanistan. According to sources, this attack took place at 6 am on Saturday. According to the information received from Kabul, at present, the Gurudwara is now in the possession of terrorists. One person has died and two people are injured in this attack. Information is being received about the person killed in the attack that he is the guard of the gurdwara.
ISIS terrorists are suspected to be involved in this attack, the Indian government is monitoring the situation. Responding to media queries on the terrorist attack on the Gurudwara in Afghanistan, Foreign Ministry spokesperson Arindam Bagchi said, "We are deeply concerned by the news of the attack on a holy shrine in Kabul. We are closely monitoring the situation and are awaiting detailed information about the incident.
It is being told that two terrorists entered the gurdwara and fired indiscriminately at the devotees. More than 8 people are trapped inside the gurudwara. Three members of the Taliban fighting against these terrorists have also been injured. At least 25-30 Afghan Hindus and Sikhs were inside the gurdwara for morning prayers when the terrorists attacked. At least 10-15 of these people managed to escape from the spot. While the rest are trapped in a fight inside the gurudwara. The Taliban force, which is handling the responsibility of security, has stopped the entry into the area.
External Affairs Minister S. Jaishankar has urged everyone to condemn the attack on the Gurudwara. He said in a tweet that 'the cowardly attack on Parwan doing the Gurdwara should be condemned in the strongest terms. We are closely monitoring the developments since we got the news of the attack. Our first and foremost concern is for the welfare of the community. While Punjab Chief Minister Bhagwant Mann has also condemned this terrorist attack. Mann urged Prime Minister Narendra Modi and the External Affairs Minister for immediate assistance to ensure the safety of minorities in Kabul.
Also Read: Who are ISIS Khorasan Province militants? Accused of attacking at Karte Parwan Gurudwara in Kabul
According to the given report by Delhi Bureau, some terrorists attacked the Parwan Gurdwara Sahib in Kabul at 6 am today. Several explosions were heard in the Karte Parwan area of ​​Kabul city. Whereas BJP MLA Manjinder Singh Sirsa has said in a tweet that he talked with Gurnam Singh, president of Gurdwara Karta Parwan. He has called for global support for Sikhs in Afghanistan.
People who were present at the time of the terrorist attack told that Ahmed, the security guard of Parwan doing the Gurdwara in Kabul, was killed by the terrorists in the attack this morning. Whereas Manjinder Singh Sirsa told news agency that according to the information received by him, 3 people have left the gurdwara so far. Out of which 2 have been sent to the hospital. The guard of the Gurdwara was killed. It is believed that 7-8 people are still trapped inside but the number has not been confirmed. Firing is still going on in the area.
Sirsa claimed that the Sikh Sangat (about 10-15 in number) was trapped in the Parwan Karate Gurdwara in Kabul. Which was attacked by terrorists this morning. One person is reported to have died in this attack. Significantly, since the return of the Taliban to power in Afghanistan, violence and bloodshed have been increasing. There have been many incidents of targeting religious places of minority communities in Afghanistan.
In the breaking development, all the terrorists, who attacked Gurdwara Karte Parwan Sahib in Afghanistan's Kabul city, are neutralised by Afghan soldiers. The Gurudwara Sahib is now under Afghanistan Police control and further updates on missing Sikhs are awaited.