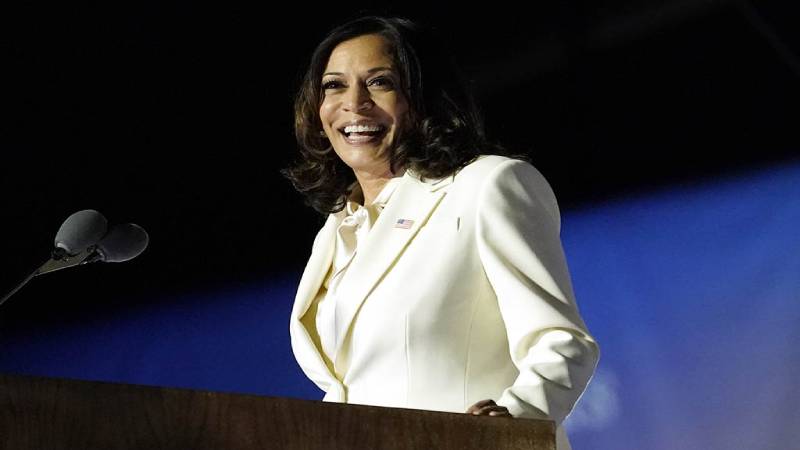 Wearing a white pantsuit in tribute to women's suffrage and taking the stage to the sounds of Mary J Blige, the first Indian and Black American woman to be elected US Vice President Kamala Harris headlined a rousing victory speech invoking memories of her mother, urging the young to "dream with ambition" and hailing President-elect Joe Biden for his "audacity" in selecting a woman as his running mate.

Pulitzer Prize-winning historian Jon Meacham described Harris' speech on Saturday night as a signal of the "renewal of an American conversation".

Early in her speech, Harris, 56, leaned into the barrier shattering nature of her role on the Biden ticket and tied it to the long arc of the American Civil Rights movement.

While paying tribute to the "too often overlooked" women who came before her, Harris noted that it has taken 100 years ago since the 19th Amendment (which granted women the right to vote) and 55 years after the Voting Rights Act for a woman to be elected to the country's most powerful political office.

"While I may be the first woman in this office, I will not be the last," Harris said midway into her post-election address.

Harris spoke on Saturday in her first national address to the nation after she and Biden were declared the winners of the presidential election against Donald Trump and Mike Pence. Biden will be the oldest president ever inaugurated at 78.

Harris, as she does in every major political stump, gave thanks to her mother Shyamala Gopalan, as the "woman most responsible for my presence here today".

"When she came here from India at the age of 19, maybe she didn't quite imagine this moment. But she believed so deeply in an America where a moment like this is possible."

And what a moment it was, even before it began. Harris arrived in a motorcade flashing red and blue lights, the first sign that the earth has shifted from beneath the Trump-Pence White House.

Throughout her speech, Harris offered glimpses of the incredible promise of multicultural America.

"What a testament it is to Joe's character that he dares to break one of the most substantial barriers that exist in our country, and select a woman as his Vice President," Harris said.

Her message to "every little girl" was that America is a "country of possibilities".

She told them, from her uniquely powerful place in history: "Dream with ambition, lead with conviction and see yourselves in a way that others may not simply because they've never seen it before, but know that we will applaud you every step of the way."

For their part, Harris and Biden face tough challenges ahead. They have won but like Trump says, more than 70 million Americans have voted for him, and a lot of his votes came from areas ravaged by the coronavirus. In Trump's grievances, those voters found common ground and stuck with him for the second time in four years.

Yet, Saturday was a day of national celebration in the middle of a raging pandemic. Americans poured out in street corners and downtown, enjoying a nationwide version of a block party. They waved from balconies and car windows, honked horns and cowbells, sang and danced, an awesome sight that brought back familiar comparisons to the Obama win in 2008.

"For the last four years, I've been living in a cave because Trump was President. It was very dark there. Now, I can come out of my cave," said Peter Oh, a voter in Washington State.

Get the latest update about Top English News, check out more about US Vice President, Donald Trump, Joe Biden & America