The Kapil Sharma Show: Kangana Ranaut is one of the few people in the industry who is never afraid to mess with anyone. 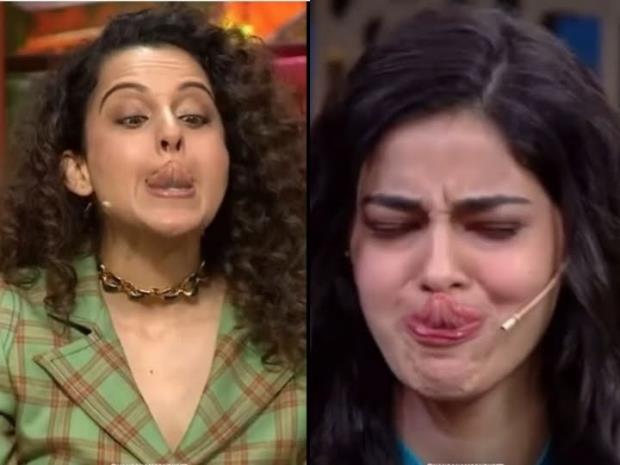 The Kapil Sharma Show: Kangana Ranaut is one of the few people in the industry who is never afraid to mess with anyone. Known for her 'Dhaakad' style, the actress speaks freely in front of everyone, whether she is trolling someone or speaking on any issue in the country.
Recently, Kangana Ranaut reached The Kapil Sharma Show to promote her upcoming film 'Dhaakad' where the actress had a lot of fun. At the same time, Kangana also targeted a star kid in gestures.
A video of Kangana from Kapil's show is becoming quite viral in which she is seen making fun of actress Ananya Pandey, daughter of film actor Chunky Pandey. Although she did not take the name of Ananya, the way she is doing mimicry, Ananya also did something similar in Kapil's show.
Also Read: After Abhishek Bachchan, Ranbir now Kartik Aaryan to marry next? Watch actor's 'hilarious' response to Kapil
Kapil as seen in the video, asks Kangana what is 'Bolly Bimbo', Kangana? On the comedian's question, she shows her tongue by putting her nose which looks quite funny and says 'I can touch my nose with my tongue...'.
After this, the clip of Ananya is seen in the video in which she too touched her nose with her tongue and said that this is her talent. Seeing Kangana doing this, even Kapil could not stop laughing. This video of the Kangana Ranaut on Ananya Pandey is going viral now.
Raising the issue of nepotism
This is not the first time that Kangana has been seen attacking Star Kids. Rather, it was Kangana who raised the issue of nepotism in Bollywood in Karan Johar's show. After this, in all the interviews and events, Kangana is seen openly presenting her impeccable opinion in a cool style.