Recently, Kangana Ranaut has reacted to the campus violence at the Jawaharlal Nehru University, calling it a 'gang war' and said that it should not be politicsed to make a national issue. 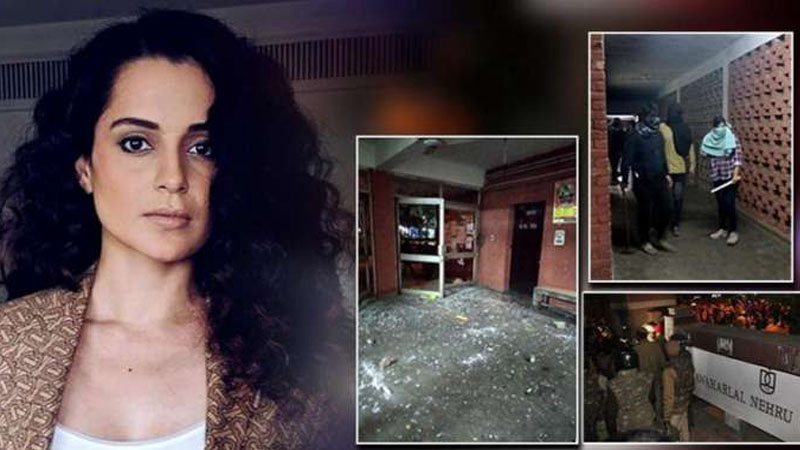 She also suggested that. 'the police must take action on the people responsible, put them to custody and beat the hell out of them."

Kangana is presently busy with the promotions of her upcoming film, Panga. Speaking to the media on the sidelines of the promotions, the actor said about the Sunday incident where students and faculty members were attacked by a masked mob. The attack on the JNU students is currently being investigated. It is understood that there are two sides, namely, JNU and ABVP, two different unions, in the university.

Gang wars in colleges are so common that when, "I was in college at Chandigarh, I used to stay at a girls hostel alongside a boys hostel where people were followed and murdered in broad daylight. A boy once jumped into our hostel who was about to get killed by a mob, but our hostel manager saved him.” Media reports on her comments were shared by sister Rangoli Chandel on Twitter.

She went on to say, “I would like to say that these gang wars are managed by powerful and dangerous people, which leaves both the sides hurt; such things should not be made into a national issue. Police should take perpetrators into custody and give them four slaps each. Such people are found everywhere in every street, college and they should not be made national issue because such issues don’t deserve it.”

Recently, Deepika Padukone had visited the JNU university to show her solidarity with the students. Her visit led to divisive reactions with many supporting her in the film industry but trends like Boycott Chhapaak emerging on social media.

On work front, Kangana will be seen playing the character of Jaya Nigam, who is a national level Kabadi player who left her dream behind to settle for a regular life with the lover of her life. After leaving the sport years ago, unfullfilled aspirations keeps haunting Jaya who often end up kicking her husband in bed. Realization strike the Railways ticket executive hard when she spots a kabaddi team waiting for their train at platform and no one recognises her.

From the looks of the trailer which was recently released, Kangana Ranaut is back with another honest & brilliantly crafted film. In a three-minute trailer, the actress tries to tackle worldly stereotypes regarding women in sports and puts her heart and soul into making a comeback in the Indian Kabbadi League at the age of 32.

Get the latest update about Kanagna Ranaut, check out more about , Gang War, Delhi & JNU Violencce