Kangana Ranaut says 1947 was ‘bheek’ and India got 'real freedom' in 2014; triggers outrage

Complaint filed against Kangana Ranaut for ‘Freedom in 1947 was bheek’ comment. 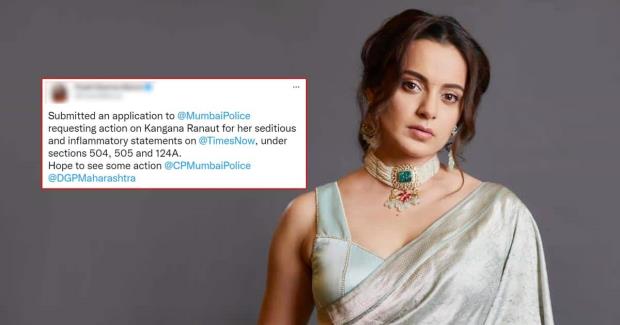 Actor Kangana Ranaut kicked off a firestorm on Thursday for declaring that India attained “real freedom” in 2014, when the Narendra Modi-led government came to power, and describing the country’s Independence in 1947 as “bheek”, or alms. The actress is now facing a complaint from Preethi Menon, the national executive chairman of the Aam Aadmi Party.

The political party condemned the derogatory statements made by actress Kangana Ranaut and urged that a case be registered against Kangana for sedition. Preethi Menon tweeted that they have submitted an application to the Mumbai Police, requesting action on Kangana Ranaut for her seditious and inflammatory statements, under sections 504, 505 and 124A.

The 'Manikarnika' actor, known for provocative and often inflammatory statements, was once again at the centre of debate – and ire – with politicians across the spectrum, including BJP MP Varun Gandhi, among the host of social media users and others who reacted with outrage for her comments at an event on Wednesday evening. BJP’s Pilibhit MP Varun Gandhi shared a video of Ms. Ranaut’s remarks on his Twitter handle.

In a 24-second clip circulated widely, Ranaut says India's Independence in 1947 was not freedom but 'bheek' (alms). "And we got real freedom in 2014," she said at the event organised by a new channel with some people in the audience heard clapping.

"It is an anti-national act and must be called out as such. To not do so would be a betrayal of all those who shed blood so that today we may stand tall and free as a nation," Mr. Gandhi said in his tweet in Hindi.

The ever combative Ms. Ranaut, whose Twitter account has been suspended, hit back on Instagram."Even though I clearly mentioned the 1857 revolution first freedom fight which was curbed... which lead to more atrocities and cruelties from the British and almost a century later freedom was given to us in (Mr.) Gandhi's begging bowl... Ja aur roo ab (go cry more)," she said in her Insta stories.

Ms. Ranaut, who was awarded a Padma Shri earlier this week, also targeted the Congress in her remarks at the show. "If we get freedom as a 'bheek', is it even freedom? What the British left behind in the name of Congress... They were the extension of the British...,” she said. Others, too, were furious, some questioning her recent Padma Shri award.

Lawyer Aman Wadud said it was a well-thought-out statement from the actor. "Ground being prepared to attack the Constitution. Well-thought-out statement, don't make the mistake to read this in isolation." A social media user said the "nonsense talk" by the Padma Shri winner was a "direct disrespect to all our freedom fighters".