Kangana Ranaut supports Will Smith, wishes him to be a part of Lock Upp; Ekta Kapoor reacts

Several Hollywood stars including Cardi B, Maria Shriver, Trevor Noah expressed their reactions to the onstage scuffle through their social media handles. 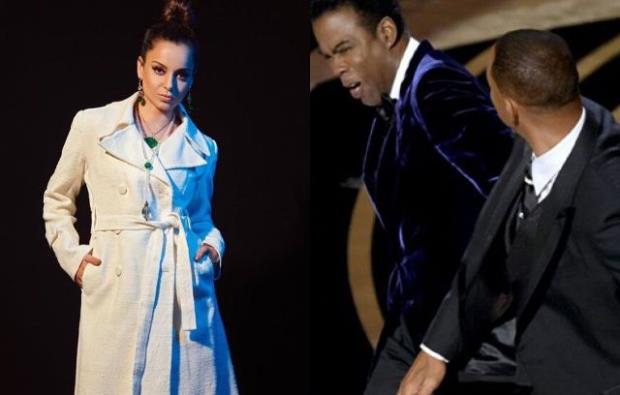 The 94th Academy Awards ceremony had a slew of moments that would forever be etched in the history of Oscars, and one would surely be Will Smith`s slapping controversy.
In this, Will Smith won the Best Actor Award.  However, it’s him slapping presenter Chris Rock on the stage for making a joke about his wife Jada Pinkett Smith that has become the talk of the town. Bollywood actress Kangana Ranaut shows support to Will Smith.
Kangana Ranaut took to her Instagram account to defend the actor. “If some idiot used my mom or sister’s illness to make bunch of fools laugh I would slap him like @willsmith did bada** move...hope he comes to my #lockup,” wrote Kangana in her Instagram story and added a laughing emoji. 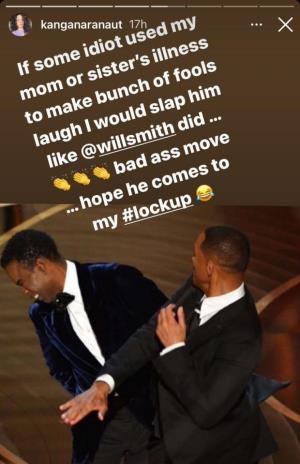 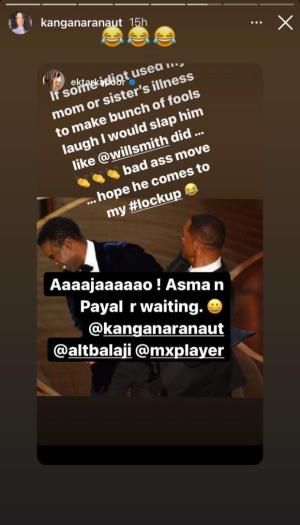 Apart from this, Gauhar Khan criticized Will Smith’s act and shared, “Oscar Jeet Gaye, par izzat haar gaye (Won an Oscar but lost respect)! Sad about #willsmith attacking a fellow artist , !!! Comedians at risk , #NewAge #Notolerance . Dialogue is everything, on screen and off. #Oscars.”
Also read: Controversy at the Oscars after Will Smith slaps Chris Rock, 'Was it staged'? What really happened; Know Everything
Several Hollywood stars including Cardi B, Maria Shriver, Trevor Noah expressed their reactions to the onstage scuffle through their social media handles.
However, later Will Smith realized that he did wrong. Sharing a post on Instagram, Smith wrote, “I would like to publicly apologize to you, Chris. I was out of line and I was wrong. I am embarrassed and my actions were not indicative of the man I want to be.”