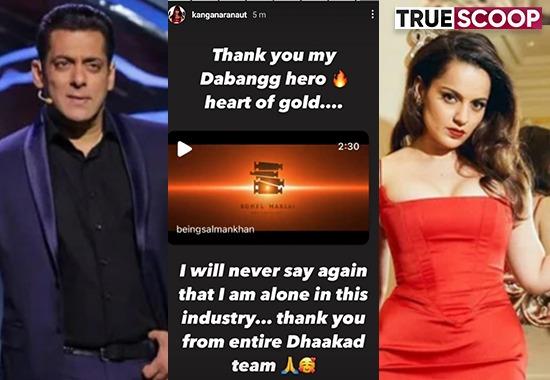 Kangana Ranaut Praises Salman Khan: The second trailer of Kangana Ranaut's film Dhaakad was released on Thursday, 12th May. After this trailer launch, Bollywood's "Queen" Kangana Ranaut got a surprise from "Dabangg" Salman Khan.
Salman posted the trailer of Dhaakad on his Instagram account and wished the entire team of the film. Not only this but in this post, Bollywood's "Bhaijaan" has tagged Kangana Ranaut as well as Arjun Rampal and the producer of this film, Sohail Maklai. The support received from Salman Khan before the release of her film Dhaakad is a big deal for Kangana.
Salman shares Dhaakad trailer 2, watch the video here
Kangana has given a very interesting answer while re-posting this post of Salman Khan in her Insta story. Re-sharing Salman's post, Kangana wrote, "Thank you, my Dabangg Hero, Heart of Gold. I will never again say that I am alone in this industry.
Thanks on behalf of the entire Dhaakad team." Salman has promoted Kangana's Dhaakad not only on Instagram but also on Twitter, although Kangana has been banned from Twitter a long time ago she has also shared the link of Salman Khan's Twitter post on her Insta.
Also Read: Kangana Ranaut gives an 'epic' reply on Bollywood vs South row with Mahesh Babu, 'Ya, We can't afford him'
Was also seen at the Eid party
This newly started friendship of Kangana Ranaut and Salman Khan amid the ongoing war of Nepotism vs Outsider in Bollywood may announce the end of this fight. However, this post cannot be called a big surprise for Salman Khan's Kangana Ranaut because recently Kangana made her presence felt at the Eid party hosted by Salman Khan's sister Arpita.
Not only Kangana but Karan Johar was also seen at this party. When Kangana was first seen by the people at this party, then everyone was shocked but now Salman sharing the trailer of Kangana's film cannot be considered a big deal in comparison to that.
Is Kangana Ranaut changing her image?
On one hand, Kangana is firm in her thinking but on the other hand, she is doing many experiments in her entertainment career. Recently she hosted Ekta Kapoor's reality show "Lock Upp".
The winners of this show, Munawar Faruqui and Kangana, have very different thinking but keeping this issue separate, Kangana declared them the winner only based on the game. Looking at the way she is joining Bollywood once again, it can be said that for the time being, the Queen has decided to reconcile with a white flag.