Kangana Ranaut on Avengers: Recently, Kangana Ranaut, who was the queen of the country's most popular show Lock-Upp Season 1. 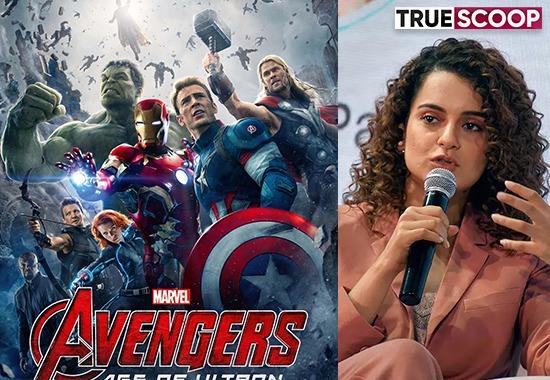 Kangana Ranaut on Avengers: Recently, Kangana Ranaut, who was the queen of the country's most popular show Lock-Upp Season One, often remains in the headlines for her impeccable style. Kangana Ranaut is the only actress who talks about every issue. Or rather, Kangana has content for every issue. She does not hesitate even a bit to express her views on any issue.
Recently, during an interview, the actress said something about Marvel Studios' superhit franchise 'Avengers' and other superhero films in Hollywood, which everyone will be surprised to hear.
In her interview with a news agency, Kangana Ranaut said that these films and their characters have been taken from our Vedas. Also, Kangana compared 'Thor' to Hanumanji, while describing 'Iron Man' as Karna of 'Mahabharata'. She further described 'Avengers' superheroes as part of American comic books published by Marvel Comics.
Further, on the question asked about the role of a superhero in the interview, the actress said that I will adopt the approach of my country for the role of a superhero. I feel that Hollywood is very much inspired by our mythology and stories.
'Hollywood superheroes are the copy of Vedas'
Kangana further says that when I see her superheroes, it seems that they have been taken from our Vedas. For example, if there is an 'Iron Man', then his armour can be compared with the armour of Karna of 'Mahabharata'. Thor and his hammer can be compared with Hanuman Ji and his mace.
Also Read: Kangana Ranaut thanks Salman Khan, says 'Heart of Gold' as Dabangg star promotes 'Dhaakad' Trailer
Why is the marriage of the 'Dhaakad' girl not happening?
During this, the actress also told why she is not able to get married? The reason for this is the rumour in people say about her that she is very combative. Also, forcefully keeps fighting with people without any meaning. Kangana jokingly said that such rumours have created such an image in the hearts and minds of people that which they are not able to find the perfect life partner for marriage.
This is Kangana's upcoming film
Talking about the work front, apart from this, Kangana is currently promoting her film 'Dhaakad', which is going to release on May 20. Kangana is playing the role of a rough and tough girl named Agni in this film.
At the same time, Arjun is in the role of Rudraveer in the film. Kangana Ranaut will be seen as a fired agent in the film. Looking at the trailer, it seems that everything will be seen in this film - action, style and thriller All in One.