On Tuesday morning, Twitter officials have suspended Bollywood actress Kangana Ranaut’s account for violating Twitter policy. The actress had posted a tweet about the alleged post-poll violence in West Bengal. The four-time national award winner had directly targeted the newly elected Chief Minister Mamata Banerjee in her last post and had also called upon Prime Minister Narendra Modi to take some strong steps against this.

While tweeting about the allegations the actress wrote, “ this is horrible..we need super gundai to kill gundai..she is like an unleashed monster, to tame her Modi Ji please show your Virat roop from early 2000s…#PrsidentRuleInBengal”. Although her Twitter account is suspended, many users were quick enough to take a screenshot of this tweet. Where many people are lashing out at the words of Kangana there are few who are speaking in her favor. 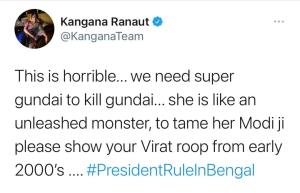 One of the Twitter users who wrote in her support says, “accounts of terrorist organizations: not suspended. Accounts of people like Sharjeel Usmani who celebrate death: not suspended. Look who's account this ‘unbiased’ Twitter suspended! Kangana Ranaut, the only celebrity who spoke about the violence committed against Hindus in Bengal”. Another user writes, “restore #KanganaRanaut. She has got the guts to call a spade a spade. Unlike the indolent RW celebs who relish in their comfy echo chambers. @twitter you guys do not remove the worst of terrorist roaches from your left-liberal cabal even if they vom worst of abuses”. 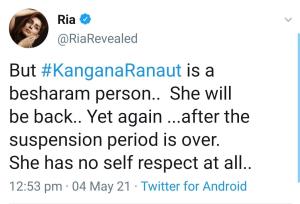 Whereas those who spoke against her wrote, “but Kangana Ranaut is a besharam person..she will be back..yet again ..after the suspension period is over. She has no self-respect at all”.