The video was posted on Instagram a day ago and it has already received more than 4 lakh views. 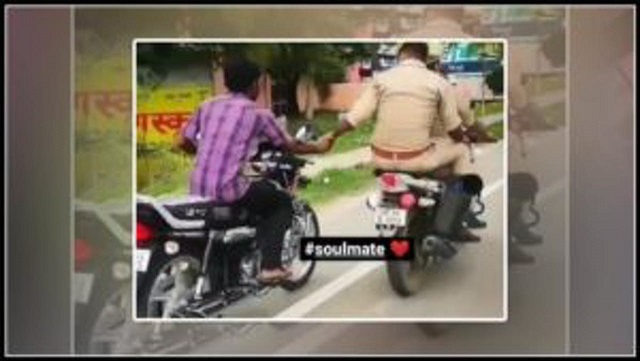 A hilarious video is going viral on social media that shows a cop using ‘jugaad’ to take an arrested criminal to the police station. The video was posted on Instagram a day ago and it has already received more than 4 lakh views. The video had the text ‘helping hand of UP Police’ over it along with ‘#soulmate’.

The video of the incident where the thief is riding a bike exclusively and holding his hand to avoid being caught is viral. The video has a lot of commentary on Instagram. The incident in Uttar Pradesh has sparked criticism of the UP police. Natives criticize how people with so much intelligence can catch criminals.

Due to this incident, UP police has once again come into lime-light. This ‘jugaad’ done by UP police doesn’t seem to be going well with the public. They are getting trolled on social media. Surprisingly, instead of using the handcuffs, the police is taking the criminal to police station by holding his hand on a bike.

The actual reason for doing this is that the cops arrested the criminal and didn’t have handcuffs or a car to take him to the police station, which is why they could be seen driving while holding each other’s hands.

The video seem to have been recorded from a car driving behind the two bikes. Troll pages and meme pages are captioning the video as ‘I had heard that the hand of the law was great, and now I have seen’. Two policemen, one accused, 2 bikers know what kind of bike should be shared. Many have questioned how the police without the common sense became police. Funny comments are making everyone laugh.