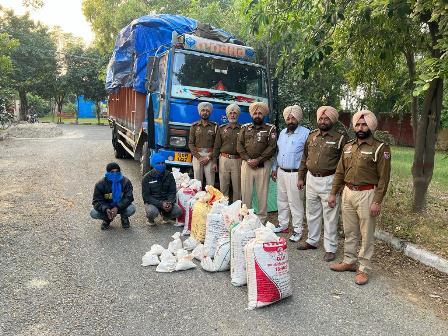 Following the directions of Punjab Home Minister Sukhjinder Singh Randhawa and Director General of Police (DGP) IPS Sahota to eliminate the drug abuse from the state, Kapurthala police in continuation to its war against menace on Thursday busted an inter-state racket of smuggling of poppy husk and arrested two peddlers after seizing 170 kg of poppy husk from a truck concealed into apple boxes.

The arrested accused have been identified as Inderjeet Singh alias Bawa of New Ajad Nagar, Bahadurke, and Rocky of Tiba Road, near gas agency in Ludhiana.

Divulging more details, Senior Superintendent of Police (SSP) Harkamalpreet Singh Khakh said the police have been keeping a close vigil on the activities of narcotics smugglers active in Kapurthala.

He said special checking teams were formed under the supervision of SP (Investigation) Kapurthala, a team led by DSP D Kapurthala Amrit Saroop constituting In-charge CIA staff Kapurthala Surjeet Singh and his team was patrolling on Phagwara highway on tip-off.

He said that the team stopped a truck bearing registration number (PB-10-ES-1227) for checking and seized 170 kg poppy husk concealed in apple boxes from the truck coming from Jammu and Kashmir.

SSP said that this is a second big haul by Kapurthala police in last 15 days following the directions of Punjab Home Minister to check inter-state vehicles specially coming from Jammu and Kashmir. On November 14, police had also seized 250-Kg poppy husk and arrested two peddlers.

SSP said that the accused have been booked under sections 15 (C), 25, 29, 61 and 85 NDPS ACT PS Sadar Phagwara and on their revelations, three accused Baljinder Singh of Rurka Khurd in Jalandhar, Nikka Gujjar Near Sudhar Ludhiana and Bashir Ahmed of Bakora Gandarwal Jammu Kashmir, have been nominated in the said case.

The police parties have been conducting raids to nab the remaining accused, he added.

He told that the accused would be produced in the local courts and would be taken on remand for further interrogation and to arrest the remaining members of the racket.