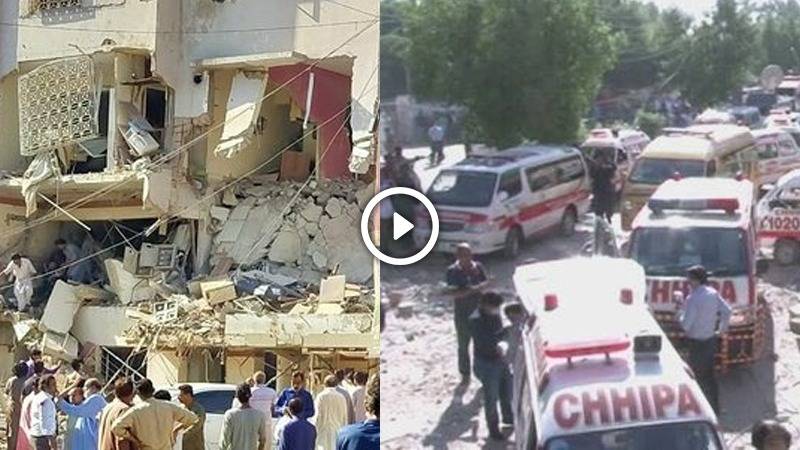 At least five people were killed and 20 others injured in an explosion in a multi-storey building in Karachi's Gulshan-i-Iqbal area on Wednesday, according to officials.

While the cause of the explosion suspected to have taken place on the second floor is yet to be ascertained, a senior police official said that it "seems to be a cylinder blast", Dawn news reported.

Reportedly, all injured and deceased have been taken to hospital.

TV footage shows the infrastructure of the building located near Maskan Chowrangi has been badly damaged.

According to witnesses, windows of nearby buildings as well as some vehicles were also damaged as a result of the blast.

Sindh Chief Minister Murad Ali Shah has directed the Karachi commissioner to submit a detailed report on the incident.

Wednesday's incident came a day after five people were injured after a bomb exploded at the entrance of a bus terminal near the city's Sheerin Jinnah Colony, said the Dawn news report.

Police investigators said it was an improvised explosive device (IED) that was planted at the gate of the terminal.

According to reports, this incident has taken place at a time when Pakistani Army chief General Qamar Javed Bajwa has ordered a probe into rumors that the Sindh police chief was allegedly abducted by Pakistani troops. This abduction has been done to put pressure on Karachi Police to arrest Safdar Awan, the son-in-law of former Pakistan prime minister Nawaz Sharif.

It has also been claimed that a "civil war" like situation has erupted after there were violent clashes between police and the Army. However, in these clashes, 10 police officers were killed in Karachi.

According to Pakistan Army's media wing, Army chief Bajwa had directed the Karachi Corps Commander to “immediately inquire into the circumstances” to ascertain the facts and file a report as soon as possible.

Reiterating the facts, Safdar and Maryam, who is also PML-N Vice President, were in Karachi few days to take part in a rally of the opposition’s Pakistan Democratic Movement (PDM) when Safdar was arrested from their hotel room. It is learnt that Safdar was taken into custody by Karachi police for allegedly disrespecting the mausoleum of the country’s founder Mohammad Ali Jinnah.

However, Safdar was later released on bail.