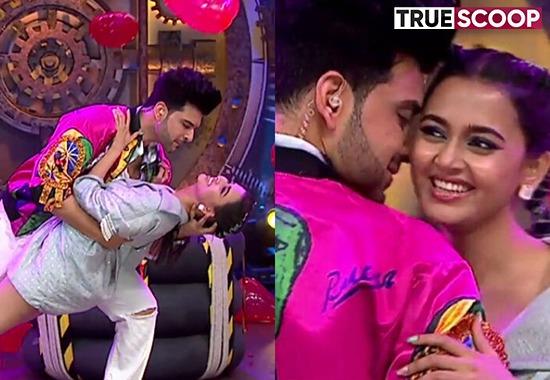 Karan Kundrra - Tejasswi Prakash Video: The Love-Birds Karan Kundrra and Tejasswi Prakash have been the centre of discussion since Bigg Boss 15. Their cute love story of both the stars also started in Bigg Boss itself.
Every day both the couples TejRan share pictures and videos of the couple on social media among their fans. Meanwhile, a dance video of Tejasswi and Karan is becoming very viral from the Khatra Khatra Show.
Recently Karan and Tejasswi have come together in Bharti Singh's show. There both have done a romantic dance. Karan Kundrra's video is becoming fiercely viral on social media?
Also Read: Shilpi Raj MMS Leaked Video: Man who recorded Bhojpuri Singer's 'naked' clip is traced; Know who was that?
The viral dancing video shows that Tejasswi and Karan are seen doing a romantic dance. The couple is seen dancing to the song 'Samjhawan' from the film 'Humpty Sharma Ki Dulhania'. In the viral video, The host Bharti Singh and Farah Khan come in the middle of the dance of both to witness the love of TejRan.
There is a tremendous craze for this couple among the fans. With their romantic chemistry, both Karan Kundrra-Tejasswi have made a special place in the hearts of people. In the past, the discussion of this couple's marriage was also in full swing. However, Tejasswi clarified that the marriage is not happening yet.
It is worth noting that some time ago Tejasswi had talked about marriage plans with Karan in an interview. She had said – we are focusing on our work. We haven't got a chance to talk about this yet.