She said, “Saif has a child every decade – in his twenties, thirties, forties and now in fifties. I've told him, in your sixties, that's not happening." 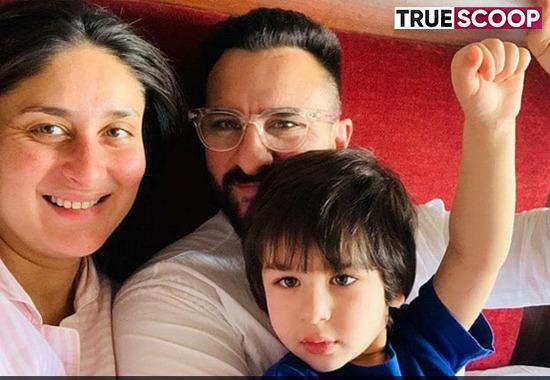 Actress Kareena Kapoor tied the knot with Saif Ali Khan in 2012 after dating for a few years. The couple now has two children - Taimur Ali Khan and Jeh Ali Khan.
Saif has two children from his first marriage with Amrita Singh – Sara Ali Khan and Ibrahim Ali Khan.  To note, Sarah is the eldest as she is 26 years old while Jeh is the youngest as he is only one year old. Recently, during an interview, Kareena Kapoor opened up on Saif having a child every decade.
She said, “Saif has a child every decade – in his twenties, thirties, forties and now in fifties. I've told him, in your sixties, that's not happening." She further added that only a person with a broad mind like Saif can be the father of four children at very different stages.
"And now, with Jah, we're trying to balance that.  We have agreed that when he is shooting for a film, I will try not to work on one at the same time (and vice versa), ”concluded Kareena.
Also Read: Why Saif Ali Khan doesn't like to pose in front of the Paparazzi, explains Kareena; What makes 'Nawab' different
Meanwhile, on the work front, Kareena Kapoor Khan will be next seen in Laal Singh Chaddha opposite Aamir Khan. The film is the official Hindi adaptation of the popular Hollywood film Forrest Gump starring Tom Hanks.
Naga Chaitanya also has an important role in Lal Singh Chaddha. Also, it will mark Kareena and Aamir's third collaboration after 3 Idiots and Talaash. Note, this will also be his first film after Jeh's birth.
Earlier Kareena Kapoor Explains More details On Saif Ali Khan
Kareena Kapoor has recently revealed on Instagram why Saif Ali Khan does not like to pose as much as his wife Kareena or children.
Kareena has shared a picture of Saif Ali Khan on their Instagram story which reads, 'Saif does not like to pose because he has a powerful personality who likes silence.' Kareena Kapoor has also written in a funny way that now everyone knows why Saif does not like to pose for the paparazzi.
Picture shared by Kareena:
Kareena Kapoor shared the profile of Saif Ali Khan of Hello Magazine, which reads - Nawab of Pataudi, son of Sharmila Tagore and Nawab Mansoor Ali Khan Pataudi, and an actor who is perfect in every character with gloves in hand.
As fits all, Saif Ali Khan is a cordon-blue royal. His family i.e. Kareena Kapoor and two sons Taimur and Jehangir are happy with paparazzi-like faces in the cameras, while Khan is a powerful person who likes silence.