Kareena Kapoor turns up the heat in her sexy black dress, check out the pics 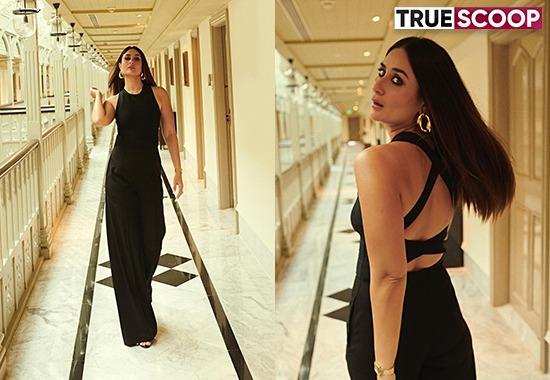 Bollywood diva Kareena Kapoor, known for her glamorous looks once again grabbed the limelight with her hot pics. The actress shared breathtaking pictures on Instagram.

The actress never failed to impress her fans with her dazzling looks. The actress often shares a glimpse of her personal life on her social media account.

This time, the fashion inspiration actress, shared her pics in a black hot avatar that amazes her fans. Every time the actress shares her pics, they go viral on the internet. This time the actress can be seen in a black sexy dress. The actress wore a black gown with a criss-cross detailing at the back.

She wore subtle makeup with smoky eyes. She kept her hair open giving them a straight look. For completing her look, she wore golden earrings. The actress has worn this dress for United Nations Young Changemakers Conclave.

Sharing the pictures, the actress wrote, “United Nations Young Changemakers Conclave” with a black heart emoji. The actress never fails to give inspirational looks. Be it at the airport, at red carpet events or on any occasion, Bebo pulls off every look and turns heads with her choices.

Also read: Priyanka Chopra’s appeal to the world leaders on the Ukraine crisis, says-We can’t just stand by and watch

Kareena Kapoor will soon be seen in Laal Singh Chaddha which has Aamir Khan and Naga Chaitanya. The movie is releasing in August 2022.