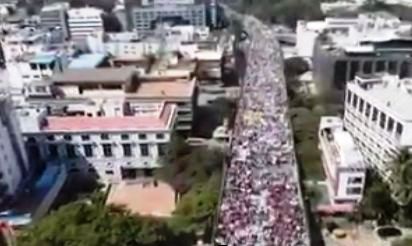 Karnataka government has announced a fees cut by 30% in the state. Majority of the private schools have declared a holiday after the move to only charge 70% of tuition fee this academic year.

The protesters were covered in the drone footage telecasted by television news channels. It affected the traffic for 30 to 45 minutes.

It was a protest organised by Karnataka Private School Management, Teaching and Non-Teaching Staff Co-ordination Committee. More than 10 organizations from of private schools marched from Bengaluru's main railway station to Freedom park.

As per reports, the government have refused to revoke its order while the teachers are demanding repeal of the order.