Karnataka Man's affection for Cobra turns nasty, gets bitten while attempting to kiss in a shocking viral video; Watch

The video shows a man holding a cobra in his hand in a garden as others surround him when the incident took place which is said to be from Karnataka’s Bhadravathi of the Shivamogga district Author : Tushar Singh 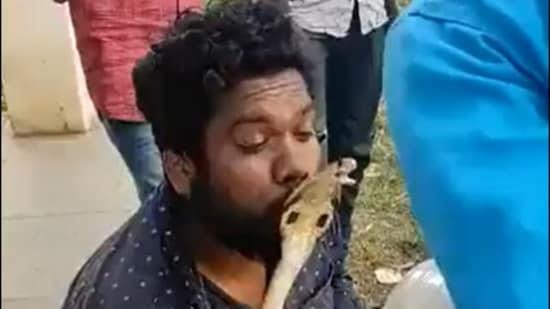 A bizarre show of love for the reptiles turned gross for the man as he was bitten by a cobra he just rescued. The man was kissing a cobra that he just rescued but turned around and bit him on his lip a video of which has gone viral on social media.

The video shows a man holding a cobra in his hand in a garden as others surround him when the incident took place which is said to be from Karnataka’s Bhadravathi of the Shivamogga district.

A reptile expert who went to kiss a cobra and got bitten on the lip..
He tried to kiss the snake after rescuing it.
#Kiss #Cobra #CobraBite #Viral pic.twitter.com/Khbfc2vK3W

The snake makes a way out of the crowd as soon as he bit the man, however, the latter survived the deadly snake bite although his identity could not be ascertained.

The incident has left Netizens split, with people expressing shades of emotions on the shocking viral video. Netizens were concerned for the man but expressed their disapproval, with one saying, “Did he make it? Folks do anything to go viral.”

While, others found a light-hearted moment, saying, “It did kiss him,” and “Sorry that snake has a boyfriend.”

In one such similar incident, a middle-aged woman who was identified as Rinku died of her injuries after she received a bite from a venomous snake outside her house.

She didn’t pay much attention to that after falling ill due to the incident and died later while she was being rushed to the hospital.