BJP Rajya Sabha MP Subramanian Swamy has come up with a strict solution to safeguard the life of Sikhs in Afghanistan. 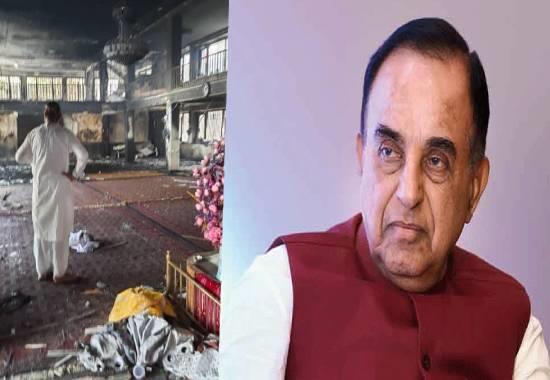 In a cowardly act carried out by the terror organization ISIS on Saturday morning,  unknown armed assailants entered Gurdwara Karte Parwan in Kabul, Afghanistan, and attacked the Sikhs inside. All residing inside the Gurdwara Karte Parwan were allegedly killed. Not only this but at least 2 Taliban soldiers were also wounded. The attack started at 7:15 am Kabul time (8.30 am India time). The guard of the Gurudwara was shot dead as attackers made their way inside. Now, BJP Rajya Sabha MP Subramanian Swamy has come up with a strict solution to safeguard the life of Sikhs in Afghanistan.
BJP Rajya Sabha MP Subramanian Swamy took to his Twitter handle and stated that the Modi government should think out of the box and deploy its 20,000 security forces in Afghanistan in order to protect the life of the Indians and especially Sikhs.
"Why should we let the Sikhs in Afghanistan be butchered by the cowardly ISIS? India should land 20,000 troops in Kabul to save the Sikhs.Modi Govt must think out of the box solutions to protect our people," wrote Subramanian Swamy.
Also Read: Kabul Gurudwara Live Updates: 2 dead after 3 explosions hit at Karte Parwan Gurudwara in Kabul
Kabul Gurdwara Karte Parwan attack
For the unversed, at least two civilians were killed and three security personnel injured after three explosions ripped through a gurdwara in Kabul on Saturday. Afghanistan's Ministry of Interior also confirmed the blasts and said a group of armed insurgents entered the gurdwara in Kart-e-Parwan area. Later, the notorious terror organization ISIS took responsibility for the attack.
"Before entering, the enemy attacked the guards with a grenade, which caused a fire, and two of our Hindu compatriots, who were injured in the attack, were evacuated and taken to hospital for treatment," the Ministry said in a statement.  Reports further suggest that a car bomb was also detonated by the insurgents before it reached its target.