Katrina Kaif New York: Katrina Kaif and Vicky Kaushal are currently in New York for a holiday. The photos of the vacation have been shared by the couple on social media. 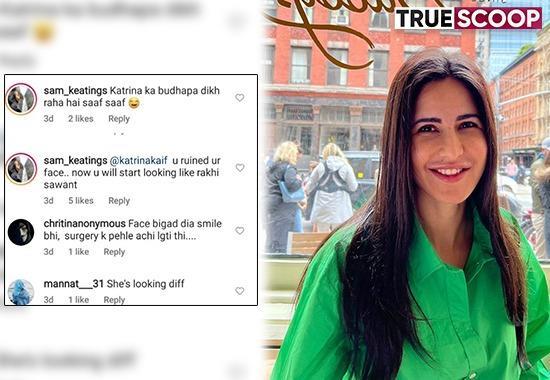 Katrina Kaif New York: Katrina Kaif and Vicky Kaushal are currently in New York for a holiday. The photos of the vacation have been shared by the couple on social media. On whom her fans are showering a lot of love.
At the same time, some people have also trolled Katrina. Users reacted to the photo while trolling that the actress has spoiled her face.
Celebs reacted to Katrina's post
Katrina Kaif recently shared photos from her vacation. In whose caption she wrote, "The home of everything, my favourite place ever baby." Katrina is seen in photos in a restaurant named Babbi. The actress is wearing green colour attire.
Her husband Vicky Kaushal is also seen in the photos. Many celebs have reacted to this post. Alia wrote, "How dare you?" On the other hand, Arjun Kapoor commented, "Baby with every hubby."
Users trolled Katrina
Vicky Kaushal and Katrina Kaif's fans are also making beautiful comments on the post. Fans called Vicky-Katrina the best couple in Bollywood. Someone wrote that both are looking very cute together.
On the other hand, some people have trolled Katrina. One user wrote, "Katrina's old age is visible." At the same time, another wrote, "You spoiled your face, now you too will start looking like Rakhi Sawant." Another wrote, "Face spoiled, smile too, looked good before surgery."
Also Read: Here are the 5 Netflix series that you will undoubtedly become addicted to

Married in December last year
Katrina and Vicky tied the knot on December 9, 2021, last year at Six Sense Fort Barware in Rajasthan. Both were dating each other since 2019. On the work front, Katrina will soon be seen in the film 'Tiger 3' with Salman Khan.
Apart from this, she will be seen in 'Phone Bhoot' along with Siddhant Chaturvedi and Ishaan Khatter.
On the other hand, talking about Vicky, these days he is shooting for his upcoming film 'Production No. 25' with Sara Ali Khan. Apart from this, Vicky will soon be seen in 'Govinda Naam Mera', 'The Great Indian Family' and director Laxman Utekar's next untitled