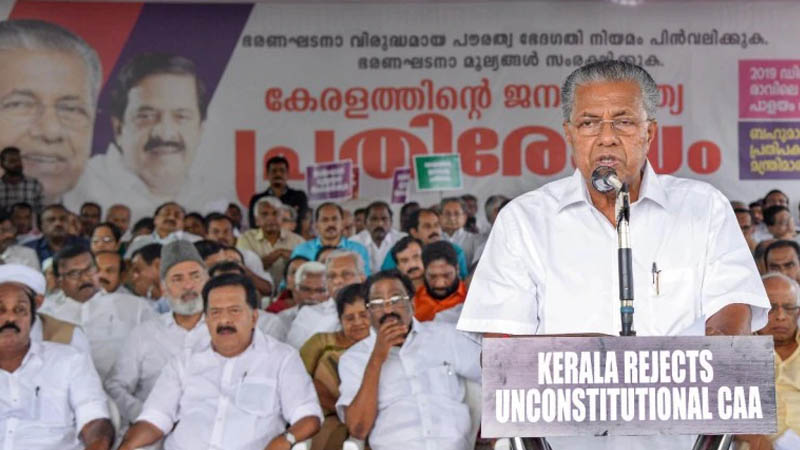 Kerala has become the first state to challenge Citizenship Amendent Act (CAA) after moving to the Supreme Court  to which several states have raised objections. Kerala was also the first state assembly to move a resolution against CAA.

The LDF government of Kerala has challenged the Citizenship Act and also the Passport Act and Foreigners Act Rules.

It argues that CAA is discriminatory because it covers only a class of minorities from a class of countries sharing borders with India and to which and from there have been trans-border migration.

“While the Hindus from Pakistan, Afghanistan and Bangladesh are covered by the Impugned Amendment Act, the defendant did not consider the issues of the Hindus, primarily of Tamil descend, in Sri Lanka and Hindu Madhesis in Terai of Nepal, whose ancestors migrated to Sri Lanka and Nepal respectively in the eighteenth Century from the then British India,” Kerala government’s petition says.

Kerala argues that if the object of CAA is to protect the minorities who faced religious persecution in Afghanistan, Pakistan and Bangladesh, then, the Ahmaddiyas and Shias from these countries are also entitled to same treatment extended to Hindu, Sikh, Buddhist, Jain, Parsi and Christian communities.

The Kerala assembly had earlier passed a resolution stating that the CAA is against the secularism envisaged by the Constitution of India and urged the central government to repeal the law. The ruling CPI(M)-led LDF and Congress headed UDF Opposition came together to pass the resolution at a special session of the House.

Chief Minister Pinarayi Vijayan, who has been at the forefront of opposing the law, had also written to 11 chief ministers to come together to oppose the CAA.

At least 60 petitions filed by individuals and political parties challenging the validity of CAA are pending before the top court and are likely to be heard on January 22.

There were protests in Kerala last month against the CAA, with several hundred people coming out in Kochi and Kozhikode, demanding the scrapping of the new law.

The protesters said the act is “divisive and discriminatory” in nature and was aimed at “polarising the society”.

The CAA seeks to provide citizenship to illegal migrants from Buddhist, Hindu, Sikhs, Jain, Parsi and Christian faiths, who have come to India from the neighbouring countries of Afghanistan, Pakistan and Bangladesh, on or before December 31, 2014.