KGF 2 overtakes Dangal: Proving the calculations of right, actor Yash's film 'KGF Chapter 2' is threatening to come at No. 2 in terms of earnings in Hindi films in the country. 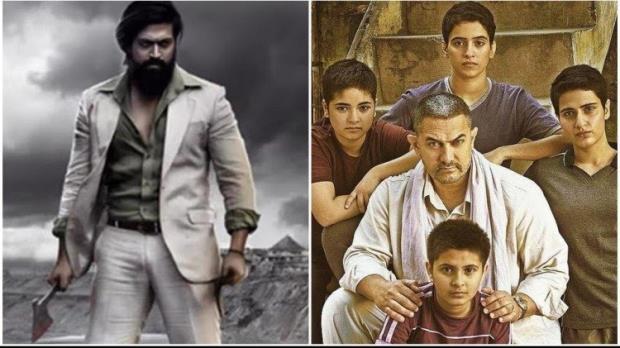 KGF 2 overtakes Dangal: Proving the calculations of right, actor Yash's film 'KGF Chapter 2' is threatening to come at No. 2 in terms of earnings in Hindi films in the country.
The effect of the overwhelming response received by the film on the Eid holiday was also seen on Wednesday and the film 'KGF Chapter 2' has surprised the trade pundits by earning about Rs 18 crores in Hindi in just these two days.
The fabric of social harmony that has been woven in the film attracted a large number of people to the film on the day of Eid and due to the praise of these people, the film did tremendous business even on Wednesday.
The success of the Hindi film 'KGF Chapter 2' has now surpassed that of Aamir Khan's film 'Dangal' which earned Rs 387.38 crore at the box office in 2016.
Impact of Social
Fabric The way the film 'KGF Chapter 2' is running sluggishly at the box office again, may surprise the businessmen We were he first to calculate that considering the weak slate of Hindi films in the last two weeks, this film will do a business of Rs 400 crore at the box office.
The whole fabric of the film is such that people of all religions and communities are coming to see it and the fair which was shown in the cinema halls showing the film on the day of Eid, confirmed the fact that the real fun of the film in theatres is with everyone.
It only comes. On the 20th day of its release i.e. on the day of Eid, the film 'KGF Chapter 2' Hindi has done a business of Rs 9.57 crore more than expected according to the final figures. The total net earning of the film till the day of Eid stood at Rs 752.90 crore.
Also Read: Malaika Arora calls Arjun Kapoor as 'Her Man', hints wedding plans; 'Wants to grow old with Actor'
And, this collection in Hindi reached Rs 382.90 crore till Eid ki Raat. The film maintained the atmosphere of Eid on the 21st day of its release i.e. the third Wednesday and earned around Rs 11.40 crore in all languages ​​according to the initial figures.
KGF 2 Hindi earned 391 crores
on the 21st day of its release, the film earned about eight crores in Hindi, about two crores in Kannada, about 80 lakhs in Telugu, and about one crore rupees in Tamil and around Rs 1 crore in Malayalam. 50 lakhs have earned. There may be slight variations in these figures after the final number.
Including the earnings till Wednesday, the total earnings of the Hindi version of the film 'KGF Chapter 2' have gone up to Rs 391 crore. And, in the case of any film released in Hindi, it is just less than the film 'Bahubali 2' which was released in 2017.

The top 5 highest grossing films in the country, either made in Hindi or dubbed in Hindi, are as follows: